the beautiful game of life 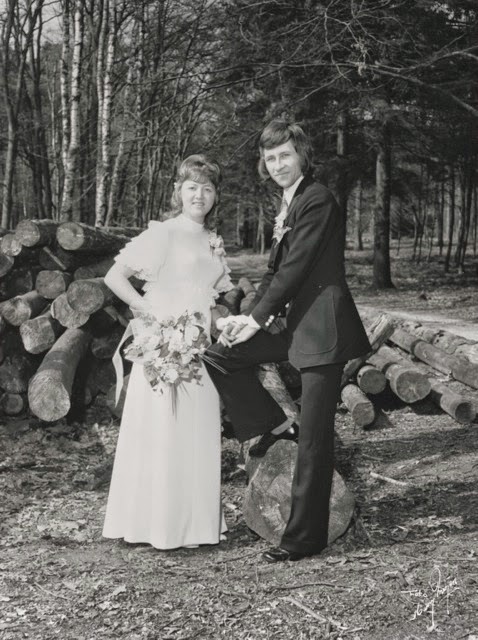 Today is my parents wedding anniversary. They would have been married 43 years today. I never have to search for the number because I am as many years old as they have been married. It was because of me they had to promise each other to stay together forever. They were both children from big families, living in a small traditional village in the east of the Netherlands. When you got pregnant, you got married. You promised each other to stay together through good times and bad times. And they did. For more than 42 years. "Until death do us part." They raised three daughters, gave them the best childhood possible. I am unendlessly grateful for that.

Sometimes I wonder what their lives would have been like if they wouldn’t have had me, if they wouldn’t have been “forced” to get married. Would they have still married each other at some point? Would they have made completely different choices? I know there is no use in thinking like that. Things happen and you go from there and at any moment you are free to do whatever you want. You can make your own decisions. And I am fortunate to have been raised in a way that made it easier for me to make my own choices than it has been for them.

8 september 2012 I wrote a post on one of my blogs. I was in my first 3-piece walking suit, walking from one side of Belgium to the other side, together with a big group of artists. That day I quoted a line I had read:

“The greatest sin a man can commit is to not be happy.”

I wrote “I agree, but it's hard. And maybe it should be. I've been a sinner myself. Trying to change (I'm in the right direction!). And in the meantime being comforted by the knowledge that I'm in good company. Here's Borges:

I have committed the worst of sins
One can commit. I have not been
Happy. Let the glaciers of oblivion
Take and engulf me, mercilessly.
My parents bore me for the risky
And the beautiful game of life,
For earth, water, air and fire.
I failed them, I was not happy.
Their youthful hope for me unfulfilled.
I applied my mind to the symmetric
Arguments of art, its web of trivia.
They willed me bravery. I was not brave.
It never leaves me. Always at my side,
That shadow of a melancholy man.”

Almost two weeks after I wrote this, after I quoted Borges, I turned 40. Already a while before, I had decided some things had to change in my life. I had decided that when I turned 40, it was time to be really happy. As far as possible. Not a neverending state of bliss but living in the feeling I was doing the right things, that I was enjoying life, that I made sense to myself and other people.

I decided I wouldn’t stop walking. Walking made me happy. By being slow I added meaning to the world, it made me meet people, it created opportunities for new connections, opportunities to become aware of the things happening around me and to create awareness. To make a difference in a small way. To be in relation with the world. To fall in love with the world and the people in it.

It worked. It is a slow process but I am in no hurry. I like slowness. And 2,5 years after I decided to be happy I can actually say I am. I am happy, I am at the right place at the right time. Today it is Barcelona but in two weeks it will be somewhere else. And who knows where it will be a year from now.
I will be in the same body though. My soft armour. Walking on my two feet. 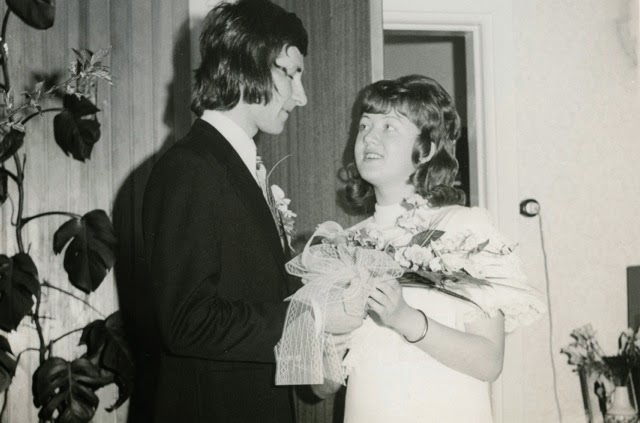 Posted by monique besten at 15:43 No comments: 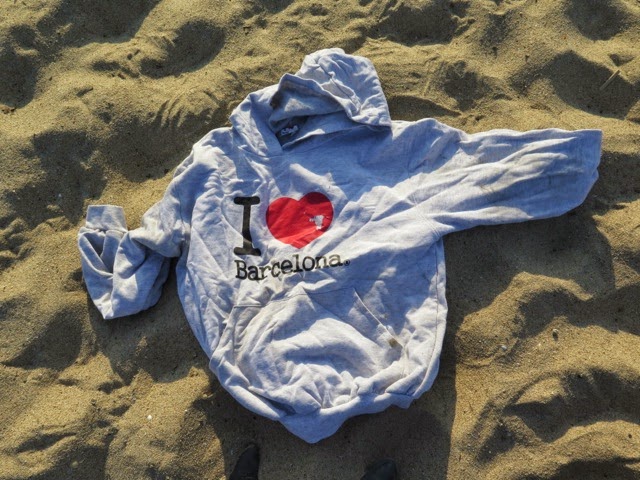 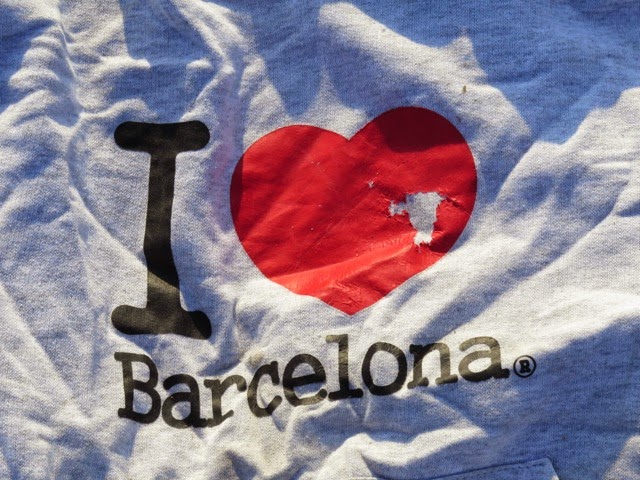 today was a monday and i decided to wear the gold i had found on the streets
golden tights, a golden sweater, a yellow dress, a glittery scarve and my favorite jacket, embellished with golden frinches and buttons

a golden monday, a day to sit on the golden sand and listen to the waves
i brought the cup somebody gifted me in the weekend on a party
i brought wine and cheese and olives
and a book, the haiku master Matsuo Bashō’s “The Narrow Road to the Deep North and Other Travel Sketches.”*

i sat in the sand on the sweater and drank wine from the teacup
reading the Oscar Wilde quote on the inside of the rim
“a dreamer is one who can only find his way home by moonlight”
the night i was given the cup i was dancing with friends
we had glitter in our hair, it was a new moon night
and since we are all dreamers and there was no moonlight we realised there was no way we would find our way home in the dark
so we waited for the morning birds to guide us

in the far distance i saw the barcelona casino
a golden building shaped like a wave
and i wondered if today, this golden day, i should take myself in my golden outfit to that place
i wondered if it might be my lucky day
and i realised it was
so i stayed where i was

when the sun set behind my back
and the sand turned from golden to beige again
i walked home slowly, bashō on my mind 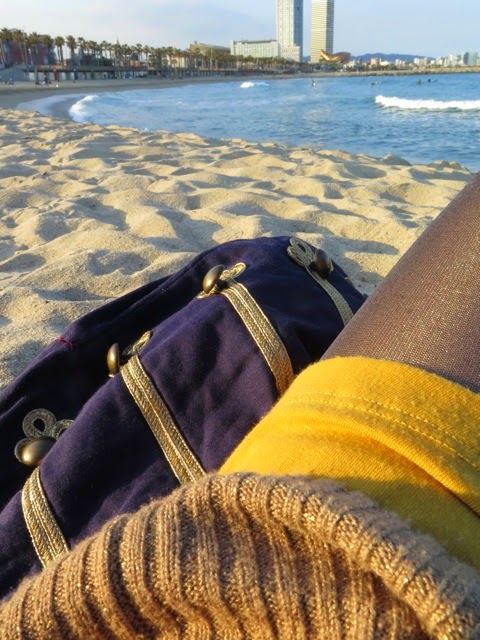 * haiku is the shortest among the traditionally acceptep forms of Japanese poetry. It consists of seventeen syllables, divided into three sections of five-seven-five. Matsuo Bashō (1644-1694) is recognized as the greatest master of haiku. An ardent student of Zen Buddhism, he wrote a lot of his poetry on a series of travels designed to strip away the trappings of the material world and bring spiritual enlightenment. 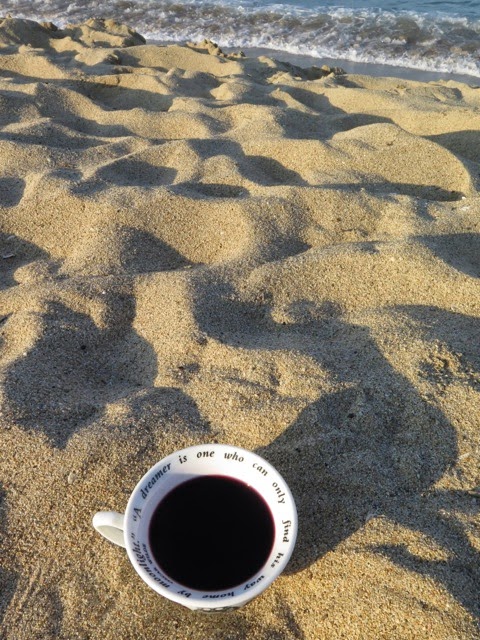 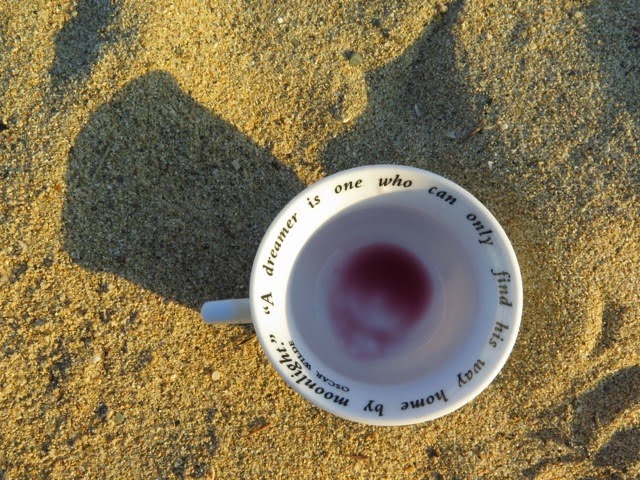 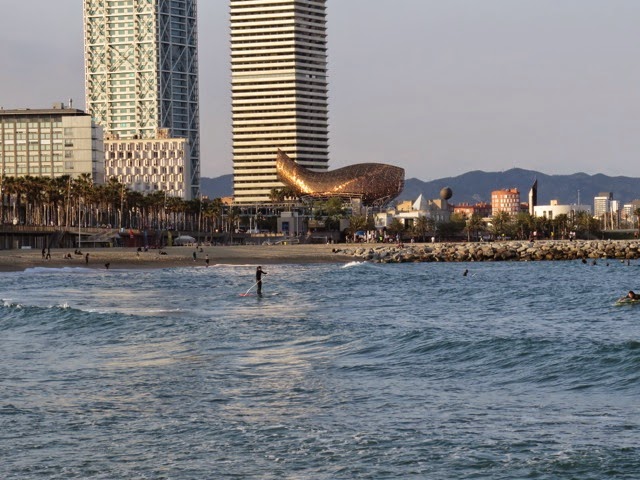 Posted by monique besten at 01:46 No comments:

running to be slow

“I wonder how it is that people's philosophies have come to spin faster than the changing seasons.”
― Masanobu Fukuoka, The One-Straw Revolution

It is the first time since long I woke up with the uneasy feeling. I tried to escape it by staying in the state between sleeping and being awake but something was nibbling on my guts. A presentation tomorrow and an exhibition on Saturday. Only two weeks left in Barcelona and then on the road to do projects and attend meetings in 12 countries in the next 5 months. There is a shipload of planning to do. Trains and planes and walks. What to bring. What to store where. Meditations about skipping travelling fast through air which involves even more complicated planning. Where to be when. What to do and why.

When you don’t know the best thing is to sit still. So I sat on my balcony and erased all the thinking. One thing came back in my mind. Masanobu Fukuoka’s words. “The best planning is no planning”.
I almost forgot about the One Straw Revolution, about “the Fukuoka Method”, a natural way of farming based on the recognition of the complexity of living organisms that shape an ecosystem. Fukuoka saw farming not just as a means of producing food but as an aesthetic and spiritual approach to life, the ultimate goal of which was "the cultivation and perfection of human beings". To grow people by growing crops. To achieve the most by doing the least. By listening and observing.

I want to grow things.


I forgot to be slow by being slow. I am running around to plan opportunities to be slow.

I could plan being really slow from October on but who knows if I am still alive by then? On the other hand: if I am not it doesn’t matter what I did the five months before. As long as I enjoyed them. 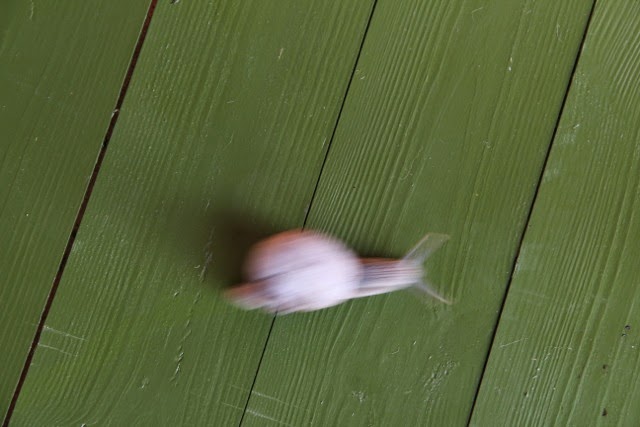 (snail running)
Posted by monique besten at 14:03 No comments: 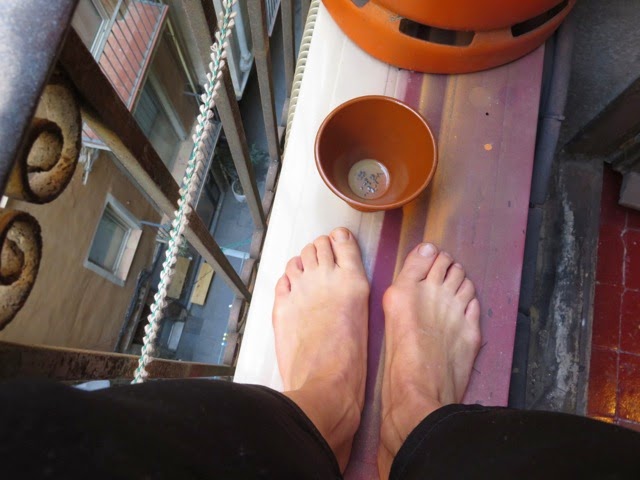 I am slowly blending in. Just now I was sitting on my tiny balcony in my found clothes, clothes that have been worn by Barcelona citizens. I was drinking coffee, looking at the people walking by in the small street I live in. A tourist stopped to look up and she took a photo of me sitting on my balcony. A typical Spanish scenery, she must have thought. If only she knew.
Still, when people ask me where I am living I tell them “here”, “here in Barcelona”. I haven’t been here long but I am nowhere else. I don’t live anywhere else. I live here. I don’t speak the language, neither Catalan nor Spanish but 70% of communication is body language anyway.

The best exercise in being here is to just be here. I wrote little lately but I’ve been using my feet. I walked and danced. I stepped on some toes. I tiptoed. I jumped. I stood still.

This city has been good to me. I am starting to feel sad about leaving. But leaving also means you can return.
Posted by monique besten at 16:44 No comments: 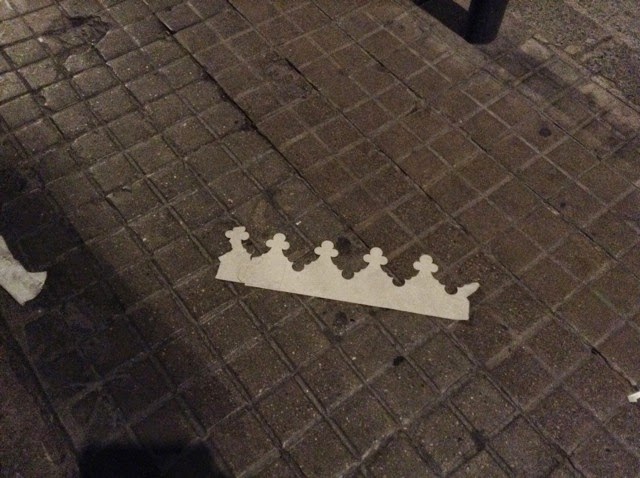 I spent my Sunday night in the company of two queens. They weren’t in the beginning, they were just two girls I met and ended up drinking beer with in Gràcia, together with some other people. They transformed during our conversations though. One of them being proud of her royal looks we all started to call “Queen” and we tried to find her a fitting crown. A crown that didn’t look like a crown. Somebody had a cap with piano keys and music notes printed on it. We crowned her just after the clocks announced the middle of the night. She had her official picture takes by a cell phone. It might be somewhere on the internet right now.  She looks a bit like a younger sister of “my own” queen. Long blond hair. Smiling always. The other girl was more secretive about her royal blood, blood that wasn’t blue but had glitter in it and changed colour, she told us. She didn’t want a crown, or maybe she secretly did. It was quite clear she was in disguise. She wore an oldfashioned beige trendcoat, the inspector Clouseau kind of coat.

When they left I wandered along with a man on an autoped and another man leaving a trace by embellishing the faces of people walking by with yellow facepaint. Some people had colour on their bodies already. Earlier today Barcelona celebrated the Hindu festival of colours, Holi.

When it was time to go home I walked through the Barcelona streets. The new people I had met walked along in my mind. Not far from my place I found a crown on the sidewalk. A golden one with diamonds and a logo I hate. 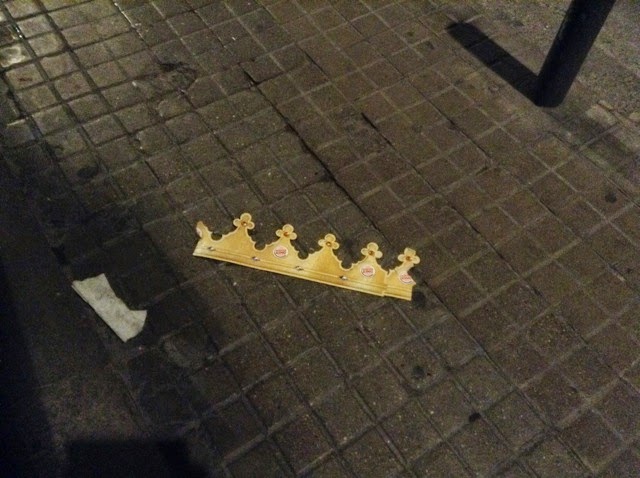 Posted by monique besten at 16:06 No comments: