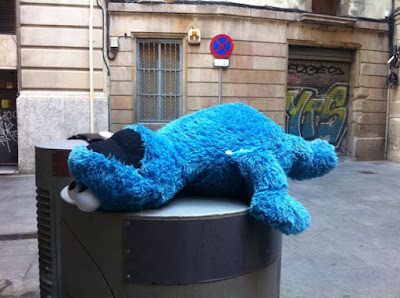 Some days even while starting the day with a walk through the city instead of opening the computer one can be confronted with cookie overload.
Posted by monique besten at 09:22 No comments:

once, as a child
when i ate an apple and swallowed the seeds
i panicked
imagining the seeds would sprout inside of me
a tree growing from my stomach
the branches piercing through my skin
until i would burst and die
and the tree would live on

when i die
bury me under an apple tree
Posted by monique besten at 10:47 No comments:


I often wonder what the use is of writing about a walk after you made it. It is kind of a walk in itself but much harder (or harder in a different way) than the actual moving through the world that is the starting point for this new adventure. The lingering, the waiting, the not knowing how to proceed during a proper walk is more enjoyable. You know you will finish it. You know you will reach your goal. You know the boring or tough bits will lead to wonderful experiences. Because it always works like that. Actually you also know it works like this when you are writing. You just have to continue and things you could not have foreseen will happen. When writing fiction, it happens when something new and unexpected comes out of your hands, your head. When a combination of words expresses something in a way you weren’t sure you would manage to achieve. Or you didn't even know you wanted to say. When writing non-fiction, which is usually partially fiction as well, it sometimes happens when you research and discover things you didn’t know when you walked into what brought you that knowledge later. Sometimes it even connects with your present state in mysterious ways, sitting behind a desk staring at your computer and taking breaks now and then on your balcony, drinking coffee and staring at the statue of Rafael Casanova on the other side of the street, the same statue the writer you bumped into during your walk was standing next to when he was arrested because of his political activities.

I sometimes say I walk to find stories. I sometimes wonder if that sounds silly or pathetic or sounds as if I’m trying to go with the current popularity of storytelling. But even if I would call it differently, that is what happens. Maybe it isn’t the main goal, I still haven’t figured that out. And anyway, it isn’t that important to have a main goal.

I only walked for three days. I've been writing about it for many more days now. Making detours, watching old episodes of "Planeta Azul', Blue Planet, not the recent BBC series by David Attenborough but black and white movies, made by "the father of Spanish environmentalism" Felix Rodriguez de la Fuente, wondering what he would be doing now if he wouldn't have died in a plane crash on his birthday in Alaska in the 80's. (It is said that his last words before he got on the little Cessna were: "This is a beautiful place to die). Diving into the history of "Els Pastorets", the little shepherds. Looking into the drystone huts that are all over the Catalan countryside. Remembering small conversations with people on the road. Thinking about laws and rules and ownership. Identifying seeds. Both literally and metaphorically.

What was the connection between all these memorials dedicated to completely different people in the middle of a forest? The virgin Mary, the Catalan writer Josep M. Folch i Torres, Felix Rodriguez de la Fuente - the Spanish David Attenborough - and the unnamed victims of the third Carlist war? And what about the stone dinosaur? And the personification of the sea? Was it all a personal project? Who had been in charge here? Was there some sort of youth movement involved? Like the wooden building (clubhouse?) and the recreation area at the end of the strange driveway suggested? One of the monuments was constructed in the “Any de la Juventud 1985”, another in the “Any internacional de l’infant 1979”. And Folch i Torres became famous as a writer for children. Were camps being organised here yearly or every couple of years and did they build a new memorial every time? When I googled “Juventud” and “St Llorenc de Savall” I found something completely different. An announcent from 2018 about the destruction of “el orfanato encantado del general Franco”, the haunted orphanage of general Franco. Apparently in this small community a huge building was constructed during his dictatorship that housed 200 young children, some without parents, some just “difficult children” who couldn’t live at home. Unsurprisingly, the regime was very strict and from the beginning on, there were rumours about strange apparations and inexplicable sounds, defined as paranormal activity. On YouTube there are videos of people who lived there as kids and claim they saw nuns standing at the end of their beds at night, silent and motionless. Which inspired inquisitive young men in more recent years to spend the night at the abandoned building, wandering through the endless rooms with shattered windows, filled with broken furniture, sheets of paper, toys, filming with their GoPro cameras. But that is a different story. There are always so many layers, so many pieces of history in every village. Maybe they are connected somehow, maybe the only connection is that it happened in the same area. 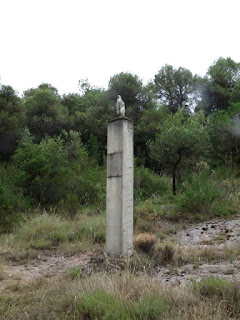 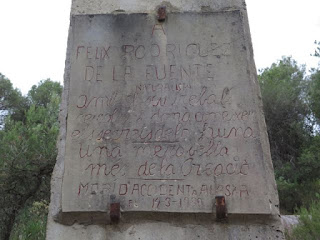 (I am still trying to figure out why this odd monument has a penguin on top of it. Rodrigues de la Fuente was especially known for his love of falcons and falconry and his struggle for the survival of the wolf. It can't be because he died in Alaska. Unless the maker made the mistake a lot of people make, thinking that penguins live wherever there is snow and ice. There are no penguins in the Northern hemisphere though).

The road turned red, ochre. Became wider. Suitable for cars although no car passed me. The stones on both sides had the same colour. A striking contrast with the yellow flowers and the green bushes and trees. It was this ochre that once inspired Picasso, not here but not so far away, in Gósol, where I was during another walk. The cycadas in the pine trees were so loud and their sound was so rhythmical I stopped walking and stood still for a while to listen to them. The blue sky was turning grey again. Another summer storm coming up. This time I wasn’t so lucky as the day before. No proper shelter and the first drops of rain turned into a continuous flow quite quickly. I chose some big trees inbetween two fields to keep me dry. They barely did, it was pouring down and the wind was so violent it turned cold. Nothing my rainponcho couldn’t withstand though. I hid in it as if it was a tent, waiting 15, 30, 45 minutes …. then it stopped and I walked into the field only to see that the sky was pitchblack and even heavier with rain. I inspected the other side and found a cavity in the rocks where a big piece had broken off and fallen down on the ground just in front of it. It was barely big enough but with my legs bend I just fitted in there and the rain didn’t reach me. It was odd to sit in this space where a rock had been and stare at the rock lying just two meters away from me. Lightning, thunder, more rain. It lasted forever. It was beautiful though. I stretched a limb now and then and looking at the rock I tried to imagine I was the rock but you need to spend more time on it if you want to achieve that. A lifetime maybe. An hour passed and then it was over. No wind, the sky a shy blue again and then the sun, so forceful that the wet layer evaporated and everything became shrouded in a silvery mist. The word magnificent is in place here. I unrocked myself, it was six ‘o clock already, three and a half hours left to find a place to sleep before the evening would fall. 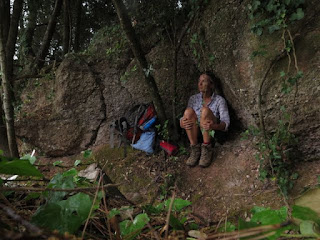 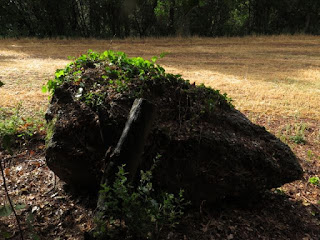 Posted by monique besten at 16:39 No comments: