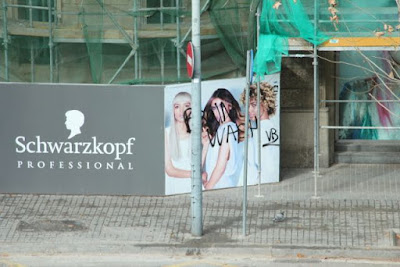 They appeared one day. A man installed them. Three immaculate women dressed in shiny white, their real beauty hidden under a layer of digital make-up, their hair in perfect shape. It wasn’t them I was seeing, they weren’t real. But they were looking at me, sitting on my balcony. I wondered how  long they would keep me company. Whenever I sat outside for a cigarette or coffee break, working from home with messy hair in my favorite old black jogging pants, we looked each other in the eye.

It was a few weeks after the heads of first three, then five blond women’were placed on a container filled with construction debris. The builders who put them there laughed their own heads off. Young men passing took selfies with the bodyless brainless women in the background. Three female street cleaners ignored the scene. They just talked and smiled, taking a break from their working duties. 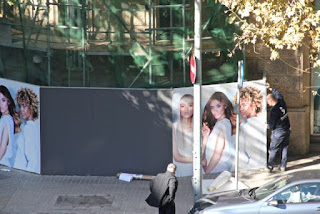 The heads were training heads, clearly from the Schwarzkopf Professional Academy. Hans Schwarzkopf, a qualified chemist, opened a tiny drugstore with a popular perfume section in Berlin at the end of the 19th century. In 1903 he developed a powder shampoo and in 1927 he developed the first liquid shampoo. These days, Schwarzkopf & Henkel is one of the largest cosmetic companies in the market. Their website says they stand for innovation, reliability, quality, trust and competence. “We believe in the whole - being greater than the sum of its parts. We believe in a passion shared – a passion for hair. We believe in true partnerships – a two-way relationship for life.” 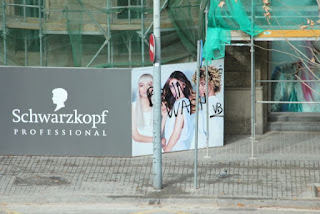 The logo for Schwarzkopf - German for “black head” is the profile of a head, usually in black, sometimes in white. It is a family name, maybe it started being used because all the prominent members of a certain family had remarkable black hair. In a different context it might almost sound like a word a racist might use. And the English word “blackhead” actually means a clogged hair follicle (pore) in the skin. The Schwarzkopf women surely weren’t suffering from that. Or at least not originally. Being exposed to the elements now, their paper skin might have caught black stains I couldn’t see from across the street.

The 3 women on the left were still there but now the logo was targeted. One morning a white speach balloon came out of its lips. It was empty. It had nothing to say. Or maybe it was a big chewing gum bubble he was blowing thoughtlessly, about to blow up in his face. The women on its left sight were effected as well. Cracks started to appear in their perfect skin. Life on the streets is tough, they could have known. 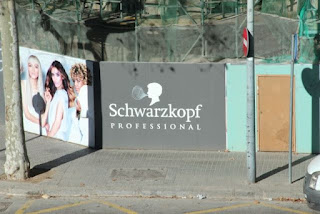 Today, almost three months after they made their appearance, their faces are gone. What is left of them looks like an iceberg, being afloat. I like it much better like this. Schwarzkopf still has nothing to say and the bubble didn’t blow up. Yet. The builders continue working steadily, some time this year they will have finished the hair academy on the ground floor plus 19 fancy apartments on the upper floors, indoor communal swimmingpool with fully equiped gym and outdoor roof terrace with swimming pool and stunning views. I imagine real women sitting behind those windows then with perfect hair, looking at me sitting on my balcony. Maybe I’ll wave at them from the other side. 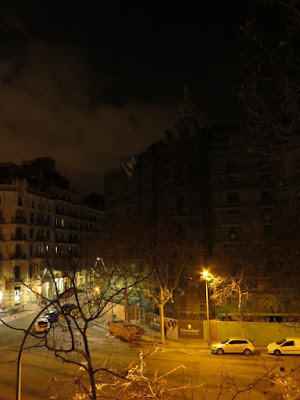 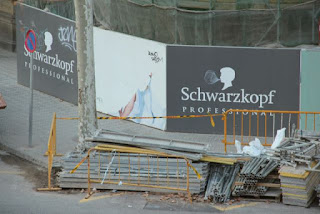 * (quote from: Hairstory. The history of shampoo. https://www.hairstory.com/stories/2017/3/24/the-history-of-shampoo/)
Posted by monique besten at 15:10 No comments:

The heart of a city 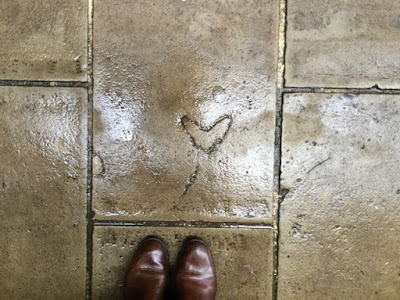 I wasn’t raised to live in a city. I was educated by trees and birds and mud and the scent of wet leaves. I hung out at hidden corners in the forest on my own, I knew what berries to eat and what mushrooms to leave alone. In my mind there was a map of the locations of all the chestnut trees in places where no regular walking trail was leading.
I learned not to be afraid of the big grasshoppers jumping around in the fava bean field when I was cutting off the tops of the plants that were almost as tall as I was small. I developed the soft touch necessary to hold last year’s old wrinkled potatoes in my hand without damaging the new young roots and putting them in the small holes my grandfather had dug in the garden. I made ink out of aok galls before I learned to write and I made soup from rainwater and insects and rosebuds before I learned to cook.
I still get a sense of belonging when I see a cornfield. And when I spend time in nature a hole fills up in my heart that I had forgotten was there all the time.

I dream of moving to the countryside. And I could. Easily. There is nothing really that keeps me tied to this city to which I’ve been coming back to in the last three years and I now call my home. Where I no longer lie awake at night because the street noise invades the silence of my room. Where my garden is a square meter slab of concrete with plants hanging from the metal railing and crowding the area around the tiny table and chair I sit on every day around 17.30 to catch the only 10 minutes of straight sunshine filtered by the big plane trees planted all along the busy road.

There is little here of some of the things I always thought would be indispensible for me to feel at ease. But because of that, the little there is is something I cherish immensely and enjoy deeply. The avocado plant that unexpectedly grew out of a seed I threw in some old plant material. The lonely broccoli plant that was part of a group of 10, overcrowding the balcony and not producing anything but leaves so they were discarded apart from one that now, a year after I planted the seedlings, is producing flowers that will seed and might give me more than the 10 plants I started out with. The sound of the birds at night attracted by the street lights. The changing patterns of the tree trunks. The sky that is blue every day even on days when it is grey. The word for blue in a language so different from my mother tongue. Azul. A word like a magic spell.

So why am I still here? It is simple. It is the same old story we walk into again and again.
I fell in love. Head over heels. Love at first sight. A love that grew stronger through time and I still don’t completely understand. A love that was tested, I wasn’t always faithful. I always returned though. But this winter, my third winter here, I seriously started thinking about whether I shouldn’t make a move. Find more green under the blue, find more silence, find more room to grow things. Replant myself. Leave her.

I am not sure if this city is feminine. My favorite blue here is masculine by language but in other tongues the sea is feminin or neutral. Das Meer. La mer. El mar. I stubbornly adress it as “her” as well.

Barcelona. I learned to pronounce it in the right way, even though saying ‘th” when reading “c” still doesn’t come naturally. I understand more and more of what the locals are saying but my speaking skills are not what I was hoping they would be after having been around for a quarter of a decade. In my conversations with this city it doesn’t matter though. We understand each other somehow. I read her from my balcony daily. I leave my footsteps in her streets in the morning when I walk to the sea. When I need something I find it. Warm winter sweaters folded up in a bag next to the garbage containers. Abandoned plants about to bloom left on the sidewalk. Wine glasses. Books.
We fit each other. We feel comfortable in each other’s company. We get tired of each other now and then. When we aren’t attentive. When we’re caught up in our individual drama’s. Histories. Future planning.

“Maybe I should leave” I thought this morning when I walked through narrow streets on Valentine’s day. But then she put her oddly shaped heart at my feet, like a shooting star. And I fell for it again.

I guess I am learning about my true nature. It isn’t carved in stone. Only sometimes for a moment. For my eyes only. I wasn't raised to live in a city. But I wasn't raised to not live in a city either. I was educated by nature and now I am learning from a place that happens to be a city. And I know it is foolish to start a love affair with a place made out of stone when you really want to be surrounded by fields and forests and mountains. But the longing for the countryside is a vacant plot in my body that is a good nurturing place for words to sprout. So for now I stick to growing small stories. And she is a generous supplier of seeds.
Posted by monique besten at 19:26 1 comment:

The mystery of Galicia 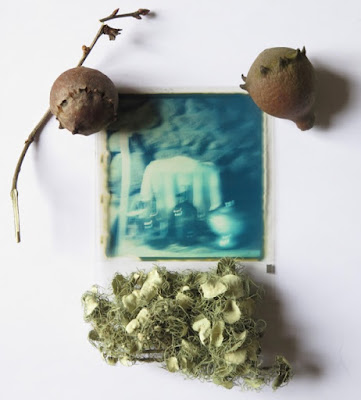 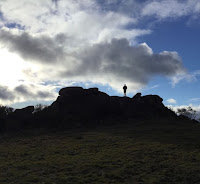 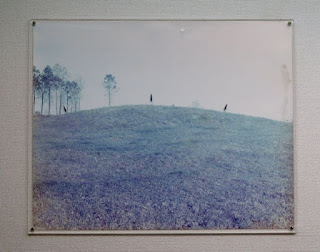 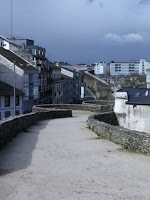 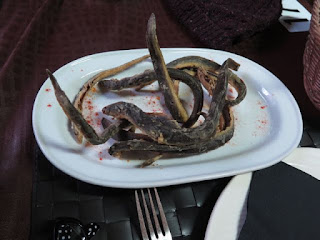 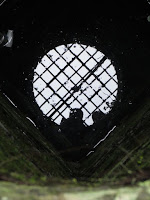 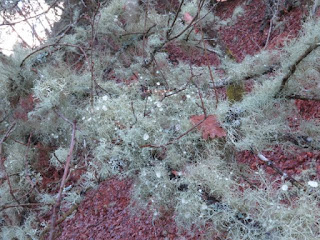 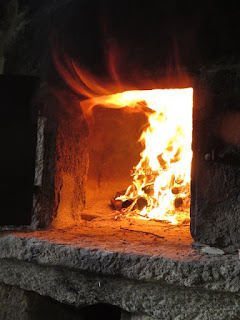 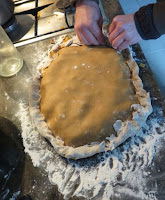 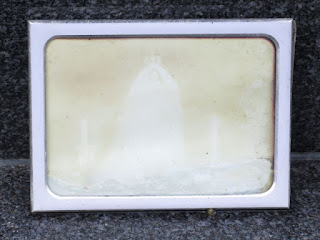 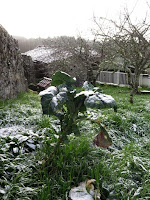 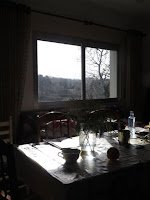 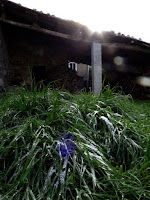 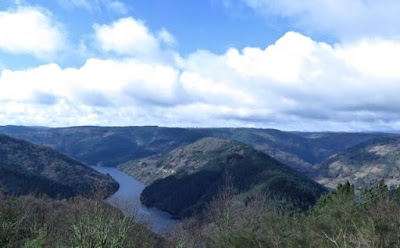 Posted by monique besten at 13:39 No comments: