When the world was one
Horses
Landscapes

(the poetry in the album titles of my Spotify Discover weekly song list)
Posted by monique besten at 13:59 No comments: 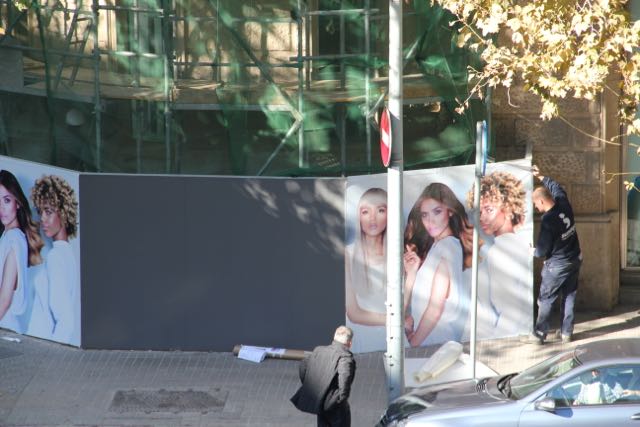 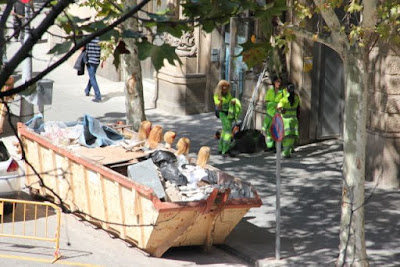 Posted by monique besten at 14:07 No comments:

Nothing more than the sun and the sea 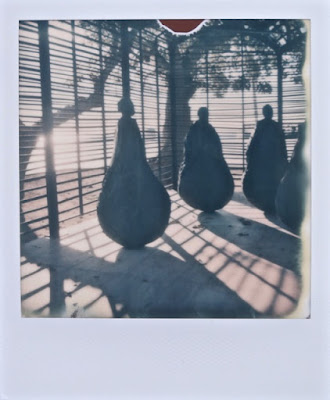 It was the right morning to visit my silent friends again. I hadn´t seen them for a long time and I knew they would be where they always are. But when I approached the beach I thought for a moment they were gone, the space inbetween the big trees was empty and I wondered if they had been taken to the exhibition elsewhere in Spain where the sculptor Juan Muñoz´s last work is currently on display. There were more big trees behind the first ones though and there they were, unmoved, as silent as ever. Unable to move even if they had been taken elsewhere. Even if they wouldn´t be in what looks like a cage, in a room where it is always raining, Una habitació on sempre plou - the installation was meant to include water so that “rain” would perpetually fall into the cage, however, due to technical problems this feature was never implemented.

The sea was loud, seagulls torpedoed themselves in the water to catch fish, waves were crashing on the shore. You could hear them coming, a low rumbling sound getting louder and louder, scary if it wouldn´t be counterbalanced by the beauty of what was causing it.
I sat on a metal storage box and stared. When I started spending time in this city I would walk here every day, 40 minutes from Gracia through Eixample, Born, Barceloneta, the same route always. Almost three years later I live 20 minutes away and I seldom come here but I know I could and that is what makes it possible for me to live in a city.

Two women in their fifties were celebrating something with a small bottle of cava, maybe nothing more than the sun and the sea. A young man woke up in the sand and positioned his backpack so he could lean against it and look at the horizon. I walked to a beach bar where I knew the coffee would be more expensive than elsewhere in town but still cheaper than anywhere in the city where I lived before I chose this one. I brought a book from my still unorganised library. Poetry works best for small breaks during a walk.

The man I had seen swimming from the left corner of my eye in the dark blue water mass had proceeded slowly to the right, where the sun lighted up the waves, where everything was bright white and he had become invisible. A woman who was dressed for a fancy but sporty holiday tried out all angles with her selfie-stick while variating the position of the sunglasses on her head, putting on different smiles and moving around her own axis to get the ultimate proof of how beautiful and happy and lucky she was.

I didn´t feel particularly beautiful and not especially happy but I did feel quite lucky. Like time, you have to take it, make it. And often when you take time you create your own luck. It sounds easy but I know it isn´t. And I suspect that most people who tell me I am lucky not having to go to work every day or catch deadlines don´t realise that I don´t go to work because I am already in it - 24 hours a day - and that I live my work and my work lives me, leads me, haunts me, exhausts me, makes me happy.
I wandered on, ignoring men trying to sell me big Indian style beach blankets, looking at other men earning a living by making sand sculptures. Three street musicians were taking a break in the sand. A man was lifting weights close to the surf.

I picked up a white round stone that fitted in the palm of my hand, held it and let the images of what I had seen this morning go through my head again in as much detail as possible. I put it in my left pocket and walked home through the park, to the Arc de Triomf, only stopping to look at a giant machine tearing down a huge building, its gripping arm resembling a giant beak, a dinosaur head, tearing off pieces of the wall. I put my hand in my left pocket without thinking.

It was silent in the house. There was a bloody bone in front of my door. Inside my room it was colder than it had been in the outside world. I put the stone on my desk, next to my computer. I made coffee and drank it while copying what I had read.

1
One day in March I go down to the sea and listen.
The ice is as blue as the sky. It is breaking up under the sun.
The sun that also whispers in a microphone under the covering of ice.
It gurgles and froths. And someone seems to be shaking a sheet far out.
It is all like History: our Now. We are submerged, we listen.

2
Conferences like flying islands about to crash …
Then: a long trembling bridge of compromises.
There shall the whole traffic go, under the stars,
under the unborn pale faces,
outcast in the vacant spaces, anonymous as a grain of rice.

3
Goethe travelled in Africa in ’26 disguised as Gide and saw everything.
Some faces become clearer from everything they see after death.
When the daily news from Algeria was read out
a large house appeared with all the windows blackened,
all except one. And there we saw the face of Dreyfus.

4
Radical and Reactionary live together as in an unhappy marriage,
molded by each other, dependent on each other.
But we who are their children break loose.
Every problem cries in its own language.
Go like a bloodhound where the truth has trampled.

5
Out on the open ground not far from the buildings
an abandoned newspaper has lain for months, full of events.
It grows old through nights and days in rain and sun,
on the way to becoming a plant, a cabbage head, on the way to being united with the earth.
Just as a memory is slowly transmuted into your own self

I am sitting on a balcony, it is chilly and I am on the shady part of the street, on the fourth floor. Right across the street, on the same level, a girl sits inside her room with the balcony doors open. The sun is shining on her face. She sits on a chair close to the doors and plays guitar.

A big banner hangs from her balcony. It is bright green and there is a woman’s face on it in white, without eyes and with a big red mark printed over her mouth. There is a text, only one word. Democrácia!

The girl in the sun has her eyes closed. I can’t hear her play but I can see her fingers move, her body slowly swinging from left to right. I can see her lips move. She is singing.
Posted by monique besten at 15:51 No comments:

Be quiet and drive away
Rolling
Over light earth

* Homo fugit velut umbra : Man flees like a shadow
Posted by monique besten at 13:57 No comments: 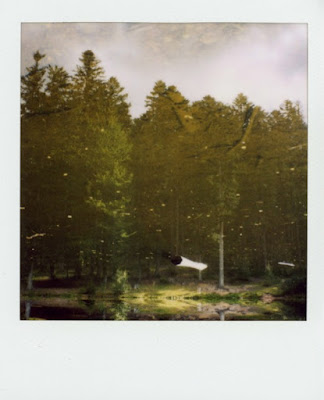 When you unsuccesfully tried to get the digital piano you transported all the way from the Netherlands to Spain working. When you neglected the Polaroid cameras you brought as well and love deeply for too long. When the sky is turning a pale pink before it gets dark on a slow Sunday where you are inside writing and reading and thinking and you feel happy-sad which is possibly your favorite mood because it makes you smile and feel alive. When you play random music and a song passes by that makes something turn upside down deep inside your body. When you read the album title and it is called “Polaroid Piano”.

Listen to it here: https://www.youtube.com/watch?v=IKqgDeVc1uQ

(Polaroid above is mine)
Posted by monique besten at 18:04 No comments: