Looking for Jesus and Jeanette 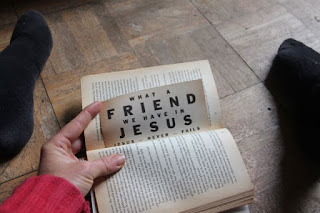 I am always surprised by the things I find in my books. Usually I left them there myself, a long time ago. Polaroids, notes, postcards. But I didn’t put this in here. And when I brouse through the book I realise I didn’t even read it, which is odd because I love Jeanette Winterson and I read most of her books. “Sexing the cherry”, published in 1990; my book is the Dutch translation but the flyer is in English, printed in the U.S.A for the Pacific Garden Mission.

I find it an interesting combination, Jeanette Winterson and The Lord Jesus Christ so I google it. “Jeanette Winterson” and “Jesus” and I find a speech she gave in 2010. “The Temptation of Jesus”, The Manchester Sermon 2010, delivered in the Manchester Cathedral. She starts with a retelling of the story of Midas, who loved gold so much that he wished that anything he touched could turn into gold. It brings her to capitalism and modern day politicians and our individual responsibility. She quotes from Matthew, writes about the soul and describes the struggle between Satan and Jesus.

I read the back of “Sexing the cherry”. It says is it a mixture of history and the most fantastic and gruesome fairy tales. Of course the Bible is the same.

Still it doesn’t explain how a flyer with the purpose of converting an innocent soul ended up in a book about “love, sex, lies and truth, and twelve dancing princesses who lived happily ever after (but not with their husbands)”. But it led me to the beautiful and still very relevant speech.

“We can blame the banks. We can feel like victims. But we bought into this. Money has been our only currency and our core value, which is insane, as it doesn’t really exist. You exist – the person I love. My body exists – my one true home. The planet exists – beautiful, blue, long-suffering, fragile, and irreplaceable. Friendship exists, and our kids, and books and pictures and music, and the feeling we get, when just for a second, life in all its unlived possibility stands in front of us.

I said at the start that I had hoped that the economic crisis would cause us to rethink our values – what is so upsetting is that the progressive secular Left has not done any rethinking worth the name – just a bit of apologising and tinkering – while the really scary Right has gone for an all-out war on all those touchy-feely policies they hated – as though subsidised theatre and the arts and single mums and welfare payments brought us to our knees – not a totally naked and savage free market god. Even Baal the flesh-eating god of the Philistines wasn’t as demanding in his sacrifices as the god of the free market. All of the planet and all of its peoples fed into the money-making machine…”

Posted by monique besten at 15:14 No comments: 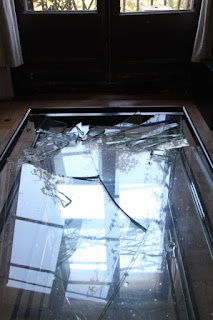 The day started with a nightmare. It was one of those classic ones, where you have to do something important and you are late and then you can’t find the right location and the harder you try, the more lost you get. It is hard to shake those off after waking up. Making coffee and drinking it on your balcony while reading something can drive it out. Not the newspaper. Some poetry maybe. Or a little bit of Jarman’s “Modern Nature”. But there was no time for it. I had to pick up the bag with my Spanish books which I had left at a friend’s place the evening before and do my homework before my class started.

It is still warm enough these days to walk around in your t-shirt most times of the day. The jacaranda trees are blooming for the second time. The street lights were still on but switched off at 8.15. Sunrise.
I used to walk to the sea in the mornings to watch it and do some writing on a terrace on my way back but these days I sit in a classroom four mornings a week, finally learning all the different ways to talk in the past and future tense. The present tense I master already, or at least kind of. The fifth day I teach. The sea is for weekends only.

I got my bag. I did my grammar exercises. There was still time to drink coffee and smoke and look at the people walking by. Some pigeons were fighting over a piece of bread. I lighted my cigarette and read the text on the lighter. I don’t know where I picked it up. It said “Nunca abandones tus sueñes. Duerme 5 minutos más.” Never abandon your dreams. Sleep 5 minutes more. Any other day that probably would have made sense.

My Spanish teacher likes to teach us some history and geography and language theory while explaining the differences between past simple and present perfect tense. We had to combine dates and facts. 1492, Columbus set foot in America. 2002, Olympic Games. 1981, Spain entered the European Union. 1936, Franco starts the Civil War. 1939, end of the Civil War, Franco comes to power. 1975, Franco dies. One of the students raised her hand and asked: “Who is this Franco?”

I walked home. I did the things you do on a Thursday afternoon. E-mails, laundry, reading the newspaper, preparing my Friday class. Nothing much to write about. An ordinary Thursday weekday. I opened my balcony doors - or tried to. When summer starts, they get harder to open. The wood expands and on rainy days it is even worse. There is a trick to open them, you put your right foot against the left door, pushing it back while pulling the handle. Sometimes it takes quite some force. Today they were very stuck. And when I pushed and pulled and leaned backwards the metal handle broke off.

Just in front of the doors there is the one piece of furniture in my room I really like. A big coffee table. I found it online not so long ago, somebody wanted to get rid of it but didn’t want to carry it all the way down many flights of stairs to dispose of it. With the help of a friend I picked it up, transported it back to my place and loved it. A heavy metal frame with an ingenious system to lift and move the top part so it turns into a table with two table leafs next to each other, one slightly higher than the other. In its “folded” state the two heavy glass sheets are in the same position with a bit of space inbetween them.

I didn’t have a scratch. Not even a tiny bruise. Just before I wanted to go out on the windy balcony I had put on a big sturdy long sleeved vest. Pieces of glass were hanging from it.

I imagined what could have happened. But nothing did. Only a table got lost, no big deal. As simple as that. Still I made sure I told the two people I talked to in the evening that I loved them. 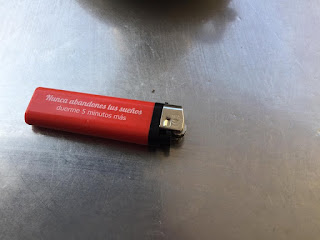 Posted by monique besten at 14:30 No comments:

from: the woman without baggage (part 2)

when noisy cars passed by at night, likes waves
she wrote
but not like this

how are you? he asked
in a different language
very good, she said
in a new one
but she pronounced it wrong

she took a cat
or more accurately: the cat took her
one day he was there and he didn’t leave
he licked her ear
and put his small paws around her neck
she fed him well
fresh meat
the heart of another animal
in pieces

one day
read: once upon a time
tomorrow
read: never
Posted by monique besten at 13:39 No comments: