On the road again. Unexpectedly. A backpack, a sleeping bag, a suit. Nothing more. Nothing less. There is food everywhere, berries and weeds and seeds. There are sheds to sleep in and hopefully some friendly people on the road. There is little room for books in my bag but I took Christian Bobin's "The very Lowly" with me. He writes about the life of Francis of Assisi. "Leaving. Leaving once more. Incessantly, endlessly leaving." And this: "The difference between men and women is not a difference of sex but of place. The man stays in his man's place, cleaves to it ponderously, with seriousness, remains safely within his fear. The woman does not remain in any place, not even her own, but constantly disappears into the love that she calls, calls, calls. This difference would be a desperate one if it were not for the fact that it can be overcome at any moment ..... A movement is all it takes, a single movement of the sort that children make when they throw themselves forward with all their might and without any fear of falling or dying, forgetting the weight of the world." And a last one: "I will be enriched by everything that I loose."

I am empty handed again. So I can fill my hands with raspberries, malva seeds, cherries, wild spinage. So I can take other peoples' hands. So I can hold my walking stick in one and hold the other one over my eyes to protect them from the sun while staring into the distance. My shadow will be my company. 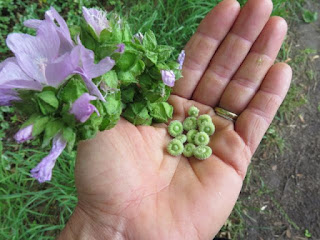 Posted by monique besten at 13:54 No comments: 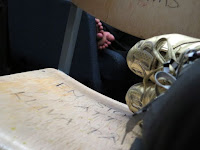 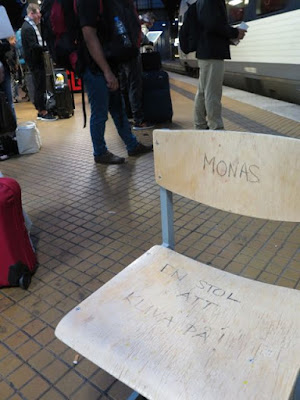 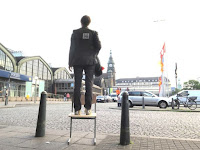 in sweden i found a chair
it said “en stol att kliva på”, a chair to stand on
it was mona’s chair but mona wasn’t there anymore
i stood on it now and then and invited other people to stand on it
to change their perspective

when i left sweden i took the chair
i travelled slowly by train through denmark, germany and the netherlands
i stood on the chair on railway platforms and city squares
i sat on it when all the seats in the train were taken
at night, sleeping on a train bench, moving through the night, i rested my feet and my golden shoes on it
i talked to people who asked me what was so special about the chair
nothing really but everything at the same time
the chair made us meet and talk
i thought about bringing the chair to barcelona
i enquired at a bus company if i could take it with me
but they never got back at me
and the chair also fitted in amsterdam
when i arrived in my small garden in the middle of the bustling city i sat on it and left it there

in barcelona i rented a room in the apartment of a friend
a big room with a double bed, a cupboard, a mirror and two bedsite tables
a small balcony looking out over the narrow street i live in here
there was no chair to sit on the balcony
on my first evening i went to a concert in a small club in gracia where they host jazz and improvised music events
when i arrived at the door two people i recognised had just arrived but i couldn’t place them straight away
then i remembered a residency in portugal in a small mountain village two years ago where i had spent time with patxi and his partner adi, where i had built an installation in a corn shed in a village with 53 inhabitants and 3.000 goats with an artist from the US, mary rothlisberger and where patxi developed a beautiful musical performance with water
patxi and adi had been living here for a year now, in this city where it seems to be so easy to make new friends and meet old ones
the same night i met two argentinian musicians from amsterdam. i had never met them before but they knew all of my amsterdam musician friends

on my way home after midnight, walking, i was accompanied by a full moon
it was still warm, the streets were filled with people
next to a big garbage container I found three ugly garden chairs
two of them were broken, one seemed to be ok so I took it
thinking it would do for now and I could replace it at some point by a nicer chair
not knowing there would be no need to replace it
I placed it on my balcony and the next morning I sat on it
it is a chair to sit on
a chair from which I can feel the sea breeze and hear the sounds of the city
from where I can see the people walking by and think about life, about the big things and the small things

a chair to love

the next evening, coming back to the apartment, another chair was waiting for me
a friend’s friend had found it and brought it for me
one leg is shorter than the others but she fixed it beautifully
now i’ve got three chairs to love 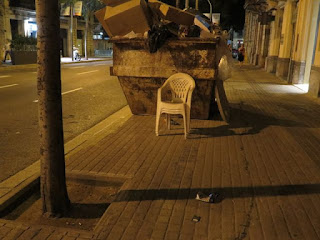 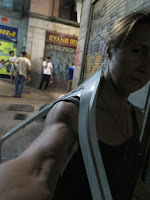 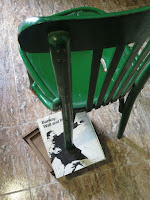 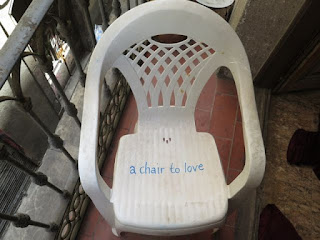 Posted by monique besten at 14:26 No comments: