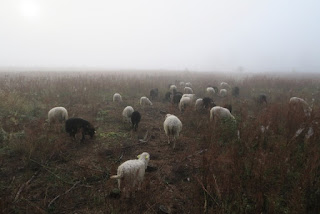 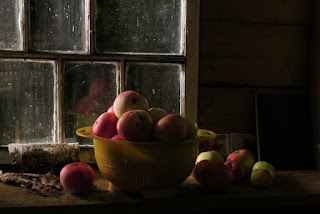 I like to tell myself I got as close to thinking like a sheep when I became obsessed by apples, but I don’t know if that is true. For weeks I walked with them and no walk was the same. It was the best part of the day, the two best parts of the day, the hours after sunrise and the hours before sunset. I never knew what would happen, where we would go. They didn’t know either, but they were in charge, as long as they didn’t try to go where they weren’t allowed to go, which weren’t many places. I counted them now and then, to make sure they were all there, 19 black and 21 white ones, but they themselves didn’t perceive each other as coloured differently. The lambs randomly approached ewes of any colour and appearance until they found the proper scent. I sometimes tried to bleat like them if I wanted their attention and it sometimes worked, but just as often they ignored me. Now and then I wondered what they were thinking, but the only moment I had the feeling I knew was just after I let them out and they started running. “Apples!” While I observed them eating, listened to them chewing, I ate an apple myself. Afterwards, in the wide open fields, I collected their favourite plants of the moment. While they were grazing, I was picking: wild plants, tree leaves, grass, the same things they were eating. Apples were their favourites though and wherever we went, there was always an apple tree close by. At home, a yellow house we kept warm with a wood fire, I turned everything into ink: different kinds of green material, plums, the charcoal from our stove, giving me a whole range of colours. 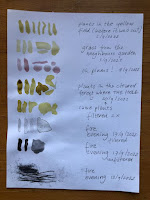 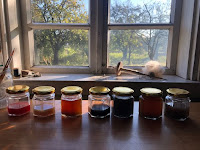 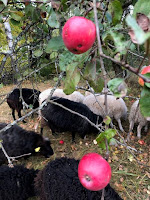 The best teachers don’t tell you what to do. They make you wonder, question yourself and your actions, they don’t give you the answers, they just show you a way to move through life. Literally, in this case.

Does spinning thread out of wool from sheep you herded bring you closer to them because your fingers sense something about the specific sheep the wool is from, or does it - even when it is necessary and first of all for their own benefit to shear them - widen the gap because you are turning something that was originally, before they were domesticated, meant to keep them warm and protected only, into a human product? I didn’t know what was the right answer, I just knew it was another way to be in the moment, like walking with them was. When I was spinning wool, my mind stopped spinning. I spun for hours at length and even considered spinning a thread as long as the distance between the sheep’s grazing grounds and the gallery where the artist-shepherds would present their work, until I realised spinning an 18 kilometre thread would take forever.

Apples were everywhere, it wasn’t just the sheep eating them every day. I made apple sauce, apple compote, dried apple slices and since there was no oven I could only dream of apple pies. When visiting local events, there were baskets of apples to welcome people. The trees around the house carried big yellow apples and smaller pink ones, sturdy green and cute little red crab apples for which the sheep broke through the fence one afternoon because they were irresistible, perfectly sheep bite-sized. Sour apples and deliciously sweet apples, most of them not perfect enough to be able to make it into a supermarket, but even the ones that didn’t taste great had the potential to turn into a whole new tree. Sometimes when I thought I was drawing an apple, it turned out to look more like a planet. 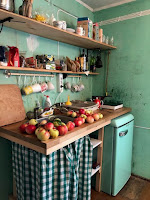 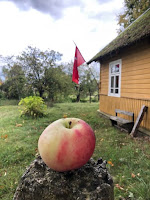 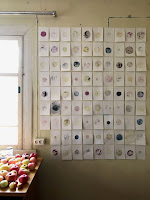 If I didn’t hide the balls of thread I had spun, the little cat that had entered the house as a wild creature a week after I arrived, stole them and unspun them under my bed. I was delighted the first time I found the result of our collective actions. In my mother tongue, the purring sound of a cat is called spinning because it sounds like a spinning wheel. She sat on my shoulder whenever I was typing on my Apple computer, which wasn’t very often because I preferred the apple world I was sharing with the sheep. 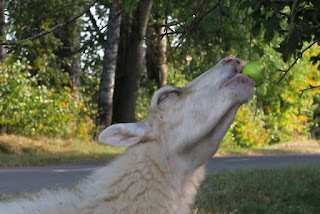 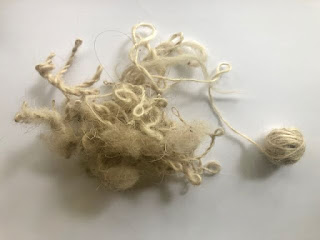 My apples are for human consumption only. When you look at them, remember that they contain what the sheep ate and what remained of the wood that kept me and everybody else in the house - my fellow shepherd, our host and our guests - warm. Feast on them with your eyes. They are not perfect but they are not supposed to be, they are the complete harvest - some unripe, some rotten - of the last two days I was in Kabeliai. I didn’t draw them to resemble apples but “to accompany something invisible to its incalculable destination”, as John Berger wrote so beautifully about the act of making something visible through drawing. I don’t know what they are, only that they are just as much sheep and shepherd as they are apple. 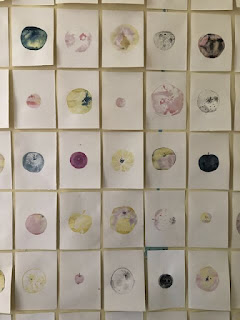 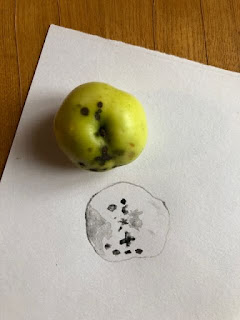 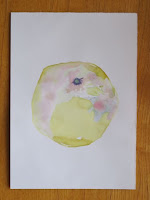 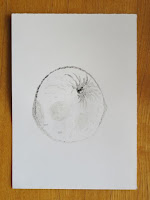 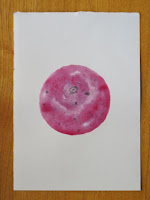 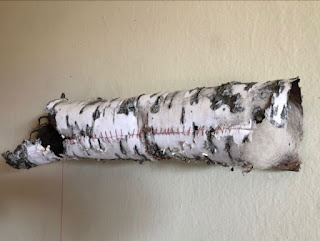 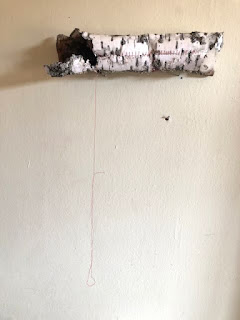 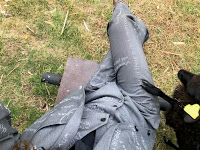 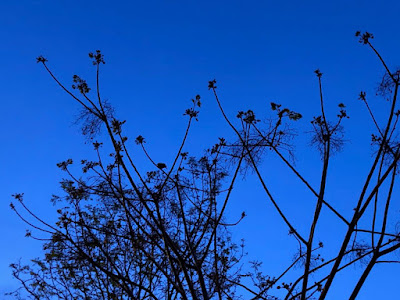 At 6.30 the darkness starts to lift and the blackbird sings his song. I don't know if it is the same one, the song sounds the same every morning and the bird looks the same but they might take turns and maybe they think the same about the person sitting on the balcony at that hour. I also wonder if I am the same person I was yesterday when I was sitting here, waiting for the black to turn into a deep blue. The streets are still empty at this hour, the first cars start to drive by, people walking the sidewalk to get to work, dog walkers, a sleep deprived father with a baby on his chest, two young girls coming back from an all night party, laughing just a little too loud, underdressed for the early morning temperature.

My route is the same every morning. Across the street they call the new Soho, along the triangular square with the church I never entered, past the stairs where later in spring the steps will be covered in little yellow flowers and later on in the morning a man will throw bread crumbs out of the window that will attract dozens of pigeons. The fountain under the trees where a multitude of little birds chirp and chatter, through the street with the homeless man sleeping under a soft brown blanket on the windowsill of a shop window, along miniature fenced off gardens carefully planted around tree trunks. The sky is my favorite shade of blue now, a melancholic blue, warm and cold at the same time. Street cleaners pass by now and then, the streets are wet, not because it has rained but because they desinfect the city every day.

It gets busier close to the train station but the little ally next to it is devoid of people. The hole in the earth, where parts of the Roman wall still stand, is empty. Sometimes little improvised bedrooms are installed in the far away corners, matresses and shopping carts with random belongings, picked up from the street. Grafiti is covering the walls, colourful tags, the Catalan flag, three windows have been covered for ages in the letters VA GI NA. Every time I pass it I wonder what on earth was going on in the mind of the person who sprayed it there. Was it meant as an offensive word? Some obnoxious kids who said "let's write VAGINA!" Or was it the opposite, somebody who thought it is a word we shouldn`t be afraid to use? Probably not. I feel the urge to add another body part. Earlobe maybe. Or hippocampus.

The last stretch goes through Barceloneta, the former fishermen`s quarters. These days there aren't a lot of fishermen living there. The beach is not a natural beach, it was constructed before the olympics, to make it more attractive for visitors. Nowadays, tractors straighten the beach every morning. Cleaners pick up the pieces of nature that are annoying for bathers. Driftwood, jellyfish, but also the endless amount of trash that is left by the tourists.
The sun is about to rise from the waves, there is a small audience spread out across the sand, the view is slightly spoiled by little figures on paddle boards. I prefer the days when the weather is less glorious and there is nothing on the water surface apart from the big fishing boat in the far distance surrounded by hungry seagulls.

On my way back I cross the Plaça del Poeta Boscà, for a while I thought it had something to do with a poet from the forest, bosque, until I realised it was his name, Joan Boscà There is a monument dedicated to him on the corner where I always drink my coffee. It doesn't look like a monument, more like a weird construction part of the underground garage one can enter just next to the monument.
The regulars are not there anymore. Some of them are still around, the younger ones, but the two sisters, always meticuously dressed, wearing red lipstick and looking as if they were ready to go to a party, have not been around. Jordi - I only know his name because the woman were always greeting him when he walked up from the newspaper stand - who used to be there at exactly five minutes after nine, seating himself at ¨his¨ table next to mine, has not been around. Maybe they didn`t survive the pandemic. Or maybe they moved out of the city. Others have been absent as well. These days I seem to be one of the last regulars at this terrace.
A man with a plastic cup in his hand asks me for money. I don`t have any coins on me and I say sorry but he doesn`t mind. He smiles and takes my hand and kisses it and wishes me a good day. I can`t help thinking that it is still unsafe to let a stranger kiss your hand but I deem it unhealthier to live with these conditioned responses to unexpected affection and let him hold my hand a bit longer. He continues his little journey, still smiling. I smile as well, order another coffee and search for Joan Boscà’s poetry online.

Love is everything treated here;
it is love's season;
all dies of love or kills for love;
without love you'll see hardly a footstep;
with love, you trade and barter;
the entire world is thus occupied;
if a tree's leaf buds
you will say that love tickles your desire.

Posted by monique besten at 14:00 No comments:

It has been a while since I've been here. March 2020. I realise it is when we went into lockdown. 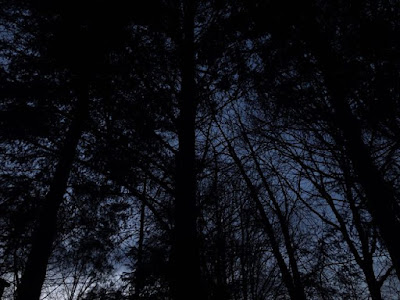 Posted by monique besten at 18:15 No comments: