when art is death 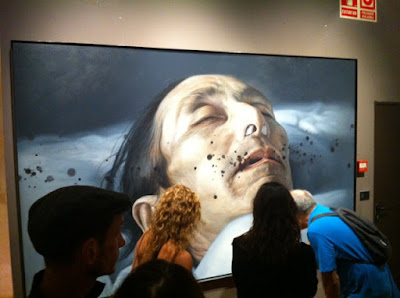 Posted by monique besten at 15:27 No comments: 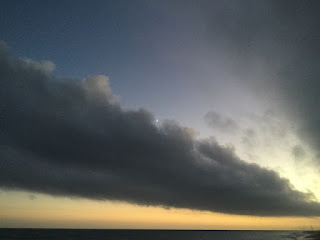 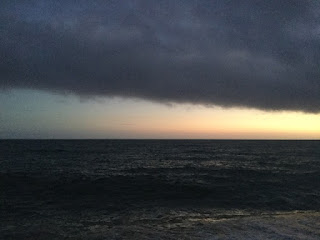 Posted by monique besten at 15:24 No comments:

My weblog statistics tell me that in the last week my writing has been read most by people from Spain, the United States, the UK, Poland, Germany, Turkey, Colombia, Denmark and Japan and one other location. What surprises me is that my home country isn’t in the top 10. But since I’ve taken some distance from the place where I was born and raised and express myself in a different language than the one I grew up in, it makes some sense. What surprises me more is number 7 in the list. “Unknown territory”. Where could that be? They must have internet there, otherwise he, she, they or it, couldn’t have read my posts.
Posted by monique besten at 12:21 No comments: 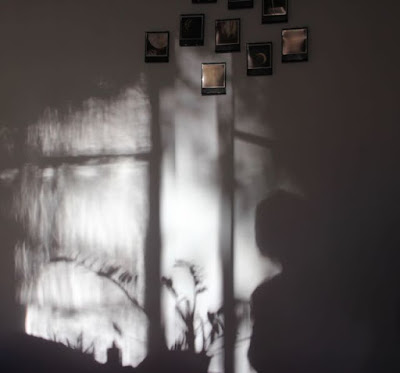 Posted by monique besten at 10:24 No comments: 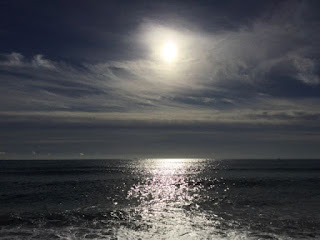 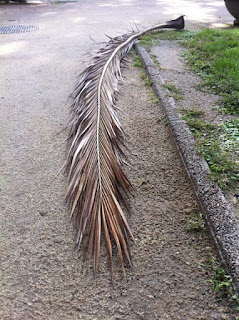 The first day of November. After a night filled with thunder and lightning the outside world looks like new. The streets are still quiet, the early morning light is reflected in big puddles of water everywhere. It is only a matter of time before the sun will rise, even though the darkest half of the year has just started.

Like a lot of Christian celebrations and holidays, All Saints has pagan roots. It originated from the Celtic celebration of Samhain, marking the end of the harvest season and the beginning of winter. It was seen as a liminal time, when the boundary between this world and the Otherworld thinned and spirits could more easily come into this world. It was believed that the souls of the dead returned home for one night and had to be appeased.

I am in the habit of walking to the sea early in the morning of November 1st and think about the dead. The ones closest to me first and when I reach the beach and sit down to look at the waves, I try to think about the others which is harder because I don’t know what they looked like, how they laughed, how they drank their coffee, how they loved and lived. But they were here. Not here where I am sitting but here in this world where I move around in.

I walk along the boulevard to the plaça del Mar to pay my silent friends a visit. They are there day in day out, in the Room where it Always Rains. Five bronze figures, slightly smaller than human size, looking in different directions and despite of their physical closeness every single one of them in complete individual isolation. They always look sad. But it always makes me happy to see them. The sculpture was made by Juan Muñoz and has been here since 1992. Not a lot of people know it is actually unfinished. The cage that surrounds them was supposed to have an irrigation system that would make it rain continually but due to technical problems the installation of the system was delayed and when everything seemed to be resolved, Muñoz died before being able to approve it. The piece was left unfinished but the original name was kept.

On my way back I see parts of palm trees scattered along the roads. Big chunks of the bark, shaped like female corsets, leaves shaped like gigantic feathers as if a prehistoric bird just flew over. The greenhouse in the park, housing a small artifical Garden of Eden, is closed. Through the planks of the doors I can see the light filtering through all the different shades of green. I’ve been here many times but I only found it open once. 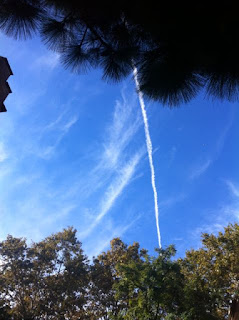 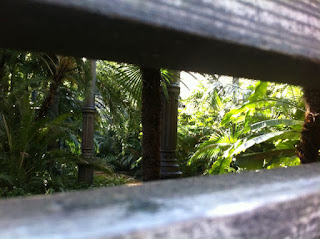 I sit down on a terrace, order coffee and open the book I brought. “The Shape of a Pocket” by John Berger. “The pocket in question is a small pocket of resistance. A pocket is formed when two or more people come together in agreement. The resistance is against the inhumanity of the New World Economic Order. The people coming together are the reader, me, and those the essays are about - Rembrandt, Paleolithis cave painters, a Romanian peasant, ancient Egyptians, an expert in the loneliness of a certain hotel bedroom, dogs at dusk, a man in a radio station.” The book was on my list of books I wanted to read and last Monday it was there, in the second-hand English bookshop in Gracia.
I read bits and pieces. Inbetween the essays are details of the photo that is printed on the cover, a crowd of anonymous people, made on Primrose Hill by Peter Marlow during the Eclipse of 1999. The last essay is titled “Will it Be a Likeness?” and between parentheses it says “for Juan Muñoz”. I knew it was in the book but that wasn’t why I had put it in my bag this morning. It was a random choice, I took it because it was the last book I bought. And when I left my house I hadn’t planned to visit the bronze figures.
I read the essay. The main character is a man in a radio station. John Berger performed the text in theater several times, directed by Muñoz himself. Apart from making sculptures and installations, Muñoz was well-known for his texts and radioplays. The first performance of “Will it Be a Likeness?” in Frankfurt was simultaneously broadcasted on the radio.
Page 246. “For sometimes a sound is more easily grasped as a silence, just as a presence, a visible presence, is sometimes most eloquently conveyed by a disappearance. Who does not know what it is like to go with a friend to a railway station and then to watch the train take them away? As you walk along the platform back into the city, the person who has just gone is often more there, more totally here, than when you embraced them before they climbed into the train. When we embrace to say goodbye, maybe we do it for this reason - to take into our arms what we want to keep when they’ve gone.”
I sometimes wonder if you can really sense the difference between somebody being out of sight for this moment only and somebody no longer being in this world at all. The sadness that comes with somebodies death is the awareness that we will never see them again, never talk to them, never hold them. But when they were still there, only somewhere else, out of eye’s reach, we never felt the same sadness. Maybe it is because we are incapable of living in the moment.

At home I continued reading on my balcony. Today is one of the last days I can see the sun for a few minutes just before 5 pm. In the next days it will disappear completely behind the buildings. The arugola is still thriving. The two avocado plants have doubled in size since spring. The weeds with the yellow flowers inbetween the cacti are still growing towards the sunlight and moved almost a meter out of the balcony into empty space. Small birds like to balance on them and eat the seeds. In one of the flower pots that has only soil and some unplanned plants in it, I notice two snails. A big one and a small one, cozily huddled up together on a dead leaf. I live on the second floor and in the two years I’ve been here, I’ve had bumblebees visiting, wasps, butterflies, caterpillars, sparrows, black and blue tits, once a big seagull, but I never saw a snail on my balcony. Where did they come from? Did they climb all the way up here? Together?

When I got my new cheap but much appreciated Ikea bookcases in the beginning of this year I left two shelves book-free and filled them with precious things, small gifts from friends, ceramic cups, memories of journeys, stones, a few small buddhas surrounding a little stone dragon and a rawhide rattle, handmade with much love, a shamanic tool that is used to help accessing the spirit realms. I received it last year, in Transylvania, when I was part of the Fire & Shadow programme, exploring the state of the world, our place in it, and how we might weave a new kind of story in an age of upheaval and uncertainty. Inbetween spending time in two of the wildest places in Europe - our first encounter was in the Scottish Highlands - our group of about 20 people met online to talk, discuss, learn and share. Susan couldn’t be there in Transylvania but she made a rattle for everybody and sent it over. I didn’t use mine to try to enter the spirit world but I was very happy to have it on me when on the fifth day, during a 24 hour solo retreat up in the mountains with nothing but a sleeping bag, I was woken up by a growling bear a few meters away, invisible behind some trees. My second thought was to grab the rattle and make some noise. Which I did. My first thought was to remain as silent as possible because I wanted to see the bear.

The rattle is made out of animal skin with a handle constructed out of dried cactus. We were all asked to think about our totem being, symbol, spirit animal, or mythical beast. I sent Susan a picture of a snail and she painted it on the dried leather part.
I don’t believe there is any meaning in my spirit animal deciding to appear on my balcony on this day. But you never know. I’ll see how long they will stay. There isn’t much to eat, they are not a big fan of arugola but I’ve got some lettuce in the fridge they might appreciate. 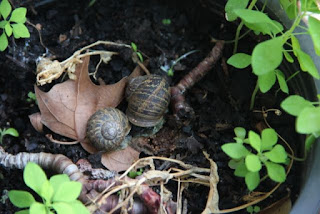 Posted by monique besten at 10:07 No comments: