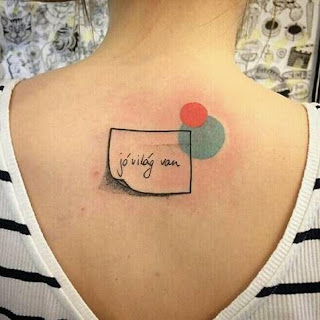 Somebody sent me this photo two days ago. A tattoo of a post-it, freshly inked. I recognised the text immediately. And the handwriting. I wrote this post-it almost 12 years ago. I actually wrote 40.000 post-it notes with the same text in one week and then filled a museum room with them, covering all walls and the ceiling.

It was the first big project I did as a full-time artist. Shortly after I graduated I was invited to live and work on the Slovak-Hungarian border for 6 months in the Bridge Guard Art & Science Centre. I spent time there meeting people, wandering the streets, doing a lot of small projects and while doing that, I regularly heard people say “Jó világ van”, a Hungarian expression (Sturovo, where I lived, was Slovak but was part of Hungary before the Trianon Treaty and 80% of the inhabitants are Hungarian) that can be translated as “Life is good!” (literally: it is a good world). People said it after a nice meal or on a pleasant Sunday outing. At the same time life was hard over there. Many people were struggling to survive and still suffering from the old political system.


Before I made my installation in the museum, I walked around on both sides of the border (formed by the Danube) for two weeks, spreading these post-it notes anonymously, sticking them on lamp-posts, cars, shop windows, church doors. As much as it was meant as a reminder, there was also a question behind it.

When I was installing (sticking) my installation in the museum some people came to protest. They said I was offending them, telling them life was good when it wasn’t, accusing me of being a rich western artist. The museum director who dealt with them, since they only spoke Hungarian, laughed when they left and said: “This was the first time these people were in the museum, how wonderful!” He told me most of them were shop owners and were annoyed by the post-its on their windows. Most of them were probably better off than I was.

After the project a local band that was inspired by my work, decided to adopt this phrase as the name of their band. “Jó világ one” just released their third album and has become a very popular band in Hungary. This week, 12 years after I wrote that line 40.000 times like a mantra, one of their fans decided to get a tattoo of one of the original post-it notes.

Amazing how ideas and images can travel through time, change shapes and develop into something new. It is truly a good world.

Many thanks to the band: http://jovilagvan.com & the tattoo artist: http://www.pictaram.com/user/dorcaborca/9665826 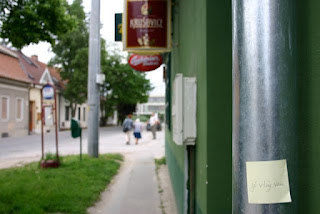 Posted by monique besten at 20:06 No comments:

The sound of money

The bank across the street has three cash machines. There is one outside and two inside. Often there is a line outside while the two inside are free. It always makes me wonder.

There is a man living inside. He is homeless. His mattress is there and a shopping cart with the few items he owns. Sometimes he is sleeping, today he was drinking beer. It is always a bit smelly in there. I don’t mind.

Even on a day like today, when it is sunny outside, he stays in. I can understand that. It is tough to be out on the streets when you are homeless and it must be tempting to just stay where you are when you are in a safe and dry place. It must be odd though, to live under a cash machine and hear the sound of money coming out of a slot all day long.


He never asks for money. I never give him any. But I always say hello when I come in and look him in the eye.
Posted by monique besten at 17:05 No comments: