How I learned to earn rewards

Wrap your troubles in dreams
Climb that mountain

This song title didn't make it in the poem but sort of says the same thing in sound: Ben Lucas Boysen, Medela
Posted by monique besten at 17:26 No comments:

Letter to a dear friend

It has been a while since I wrote to you. The last time was November 15, 2019. It was a cold beautiful night and I was sitting outside on the terrace at Sanilles, the place where we finally met, in 2016, after having corresponded for years. My friends had organised a Natural Farming course there, in the Spanish Pyrenees and had invited you to cross the ocean. It was the first time you were teaching a week long course about Natural Farming and a lot of people had gathered from around the world, you were a hero to some of them but when they met you and listened to you they also realised you were the most humble person, dedicated to being in service to others, to nature. Not only wise but also very funny and fun to be around with. I think true heroes are like that. People who subtly and slowly, with a lot of care and dedication change the world. And show us that we can all be heroes. There is no big or small.

We met there again in 2017. This time I didn’t participate in the course but I helped out in the kitchen. In the breaks or in the evening we would sometimes sit on the bench outside drinking a glass of wine while staring at the big mountains, talking about how we were all each others teachers but that the forest around us and the big mountains in the distance were our main teachers really. Of course I thought about you when I sat there again last November and the moonlight lit up those mountains beautifully. I wrote you straight away but I never got an answer. I received the sad news a few days later. I don’t know if my words ever reached you but it doesn’t matter really.

The first two things I wrote down in my notebook from that first Natural Farming course in 2016, were the words you started your teaching with.

“Soil is my entry into the kosmos. I’ve been madly in love with it all my life.”
And something Fukuoka-san said: “We can’t understand soil but we can become it.”

After I heard about your passing, alongside the gratefulness I felt for having been able to spend time with you, to have learned from you, to have laughed with you, I felt sad about not being able to share words and thoughts with you any longer. I knew you would always be my friend and teacher, like you always had been, in presence or in absence but something had changed now. It took me a while though before I realised that my last letter to you, on the 15th of November, doesn’t have to be the last one. I can still write you letters, I can still share things with you and ask you things. But I will have to walk through the forest now to get an answer. Sit on my balcony and look at my plants or at the sky. Climb mountains. Stick my hands in the soil. You’ll be there.

Once, when you were working on your book, you wrote me about your struggle with words. “Words can only take you so far” you wrote. “Even for poets like my favorites, William Blake and Walt Whitman. And Sensei had the same frustration”. Words are useless in a way. But I still don’t know what I would do without them. And I wonder who I would be if I wouldn’t have read The One Straw Revolution, which led me to you and all the other books and words for which you were responsible. Words that will continue to spread an important message.

We have all that. We have amazing memories of you. I am tempted to write about the boat club in Barcelona as well where you pretended to be a genuine captain and boat owner, putting on dark sunglasses to make it more convincing. And the look on your face when we stepped out of the metro, babbling and joking and you turned around and stood in the shade of Gaudi’s magnificent unfinished cathedral. But this letter would become too long then. And I have - well, have …. they’re not mine so I am happy I can share them here, the words you wrote me when we were talking about a recent death: "Life is a constant unfolding. Always, things come into existence, grow, mature and die. It is all happening at once, all the time. We are part of it and cannot become attached. Well, we can, but at risk of sorrow ….. I’m no guru or anything, but the simpler life becomes the closer to reality you get, and to my way of thinking, that's a good thing. But still, in times when you are struggling with loss you just have to, I don't know, get through it and let time heal. ….. Gotta go for now!"

Gotta go for now. I like that last line, even when it gets a different meaning when I read it again now. And I like those words. I did become attached though and I guess everybody who knew you became attached as well. How could we not have. And we are sad. But equally happy. Because loosing somebody makes you aware of how much you gained. Still I would have given something very dear to me to sit on that bench with you once more. But who knows, maybe we are there still. Like you might be in all those places with all your friends where you are in their memories of you.

I imagined how much fun it would be if you would walk around your own memorial service today incognito. I bet we would have recognised you by your arm gestures. Or maybe because you forgot to take off your Mu Landscaping sweater. Or because we recognised your jokes.

Take care, dear friend. I’ll go on a little walk to the sea now to hear your reply. There are many trees on the way and not too much soil in sight but I know it is everywhere under the concrete of the city. 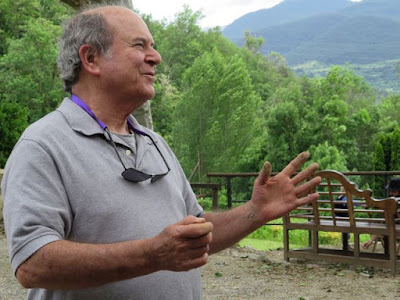