"This story is completely true since I made it up from beginning to end."

- Froth on the daydream, Boris Vian 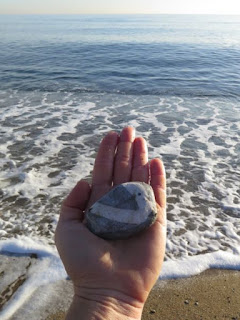 Of course it returned.
I was there at 8.14 to see it rise magistically and very red, not out of the sea but from behind it. It only took a few minutes before it turned into a big dot on the line that wasn´t really a line either.

I hadn´t planned to be here this early but after I woke up in the middle of the longest night at 3.30 I couldn´t get back to sleep. Eager to see the outcome of the Catalan elections I had made myself comfortable on the sofa around 9 pm but by 9.30 I was sound asleep with a furry animal curled around my head, a cat with the name of a fish, as black as the night itself.

Around 7 the sky was turning blue again and I had read up on what had happened after I fell asleep. The pro-independence parties had kept their majority, Rajoy’s PP had lost severely. It promised interesting and complicated times coming up. Like any outcome would have. But it was good to see these results and know the Spanish government would be in distress and hadn’t gotten it their way.

The sea was calm. A couple in a deep embrace was stretched out on the beach, not sensing the coldness of the wet sand, not noticing that the spectacle they had probably come to watch was about to begin. Seagulls everywhere, all the ingrediënts for the most cliché photo you could imagine were present.

I watched. I’d seen it before. I’d seen it almost every day last week and uncountable times in the months, years before. I guess we all have. And still we can’t stop watching it again and again. The airplanes spoiled it a bit but out of knowhere, as if to balance it, a historical three-master appeared on the horizon. I couldn’t help but thinking it might be the Pirate Party.
Small waves crashed on the shore, the foam looked like cream but once the water withdrew, it disappeared in an instance.

Of course I got too close. Water whirling around my shoes. It is part of the fun to make the same mistake always. Unintentionally. This time I wore waterproof boots. But I didn’t know that until after the sea came almost up to my ankles.

I pushed a jellyfish back into the water. I filled my pockets with stones I liked. One had a big V-shape in white on one side. “Victory”, I thought. But I wasn’t sure if I meant the political victory or the natural one: the light winning from the darkness.

Three years ago on this day it was harder. The longest night lasted almost forever, I was afraid it wouldn’t end, but of course it did. The light returned. I wrote then:

they wore boots with stars and a rainbow
they drew fire spitting dragons and cannons on my fathers coffin
the blackest black and the bluest blue
his name, their names, their own hands and hearts, many hearts

december 21, the longest night ever, the night of our wake
the last night we could touch his hands, see his smile
the night we were hungry because we shook hundreds of hands
because we looked into a thousand of sad eyes
the night we sat around him in his own living room and drank wine and used his feet to put the crisps on, without hesitation

and the next morning
when two beautifully dressed girls danced through the street from his house
spreading rose leaves on the tarmac
and one of the neighbours stopped traffic so we could slowly carry a man through the village where he was born, where he had lived for 63 years

the afternoon when we returned
and when we put his chair back to the place where it belonged
empty
but where, when we returned from the kitchen with fresh coffee and our favorite chocolate
his grandson, who was born on the same date he was, was sitting

Of course I thought about that day when I saw the sun rise over the sea. How we somehow hadn’t realised that closing the coffin would have the mirror effect of what we had experienced when we felt his heart stop beating under our hands a week earlier. Less real but a similar combination of complete panick and complete calmness. How our rituals suddenly didn’t seem to mean anything anymore. The glow-in-the dark stars we gave the children to put on the inside of the wooden box. The embroidery I made in his breast pocket. What use did they have?

Of course they had a use. We created our own stories to deal with the other one, the one that had no embellishment. The one death wrote itself. The story we didn’t want to hear and had a hard time believing.

The sun had stretched itself out, the light was everywhere. I put on my sunglasses and walked along the surf. Somebody had turned on music, so loud you could hear it all along the beach. The sandcastle builders were still sitting on the pedestal of the big sculpture, waiting for the first tourists to arrive. I seated myself on a bench on the boulevard and ate a banana. A young mother passed me, carrying her baby on her chest, she looked as if she was walking there every day and I imagined her happiness every morning seeing this enormous sea with this tiny creature strapped to her body. She looked at me and we exchanged a smile as if we knew each other. Maybe we sensed each others lightness, something connected us for just a second.

I crossed the road, walked down the stairs, passed the fountain, the square were nobody ever lingers, the playground that has become a building site, the bars, the narrow buildings. The market square where the sun shines all day. I sat down to drink a coffee and to read a little. H is for Hawk. Helen Macdonald.

While I sipped my coffee and switched inbetween my book and writing this, a friend wrote me he thought the elections had been a struggle between empty utopianism and false nostalgia, a minority of nationalists leading the public into an independence that is not good for them. I didn’t want to move out of my own ponderings about more eternal strugglings where humans are really only spectators when it concerns the big nature events (although we are clearly doing our best to change that) or are actors only when their light dies out forever and all the others are the public. I am not good at putting things aside once they enter my mind though. So I responded.

Who is this public? I asked. And I questioned his use of the word nationalist. I said I thought more nuance was needed and that it is dangerous to simplify things. He laughed, said he had better things to do than have this kind of conversation and when I wrote him I would return to my story about today’s Victory he finished off with “let’s see what victory means in six months”, a double “cheers”, some applauding hands and “whatever you say”.

Whatever I say is a true story. We all have our own truths. We all read into words what we want to see. But we don’t have to. I know what Victory will look like in six months. It will be the longest day, the shortest night and this time the darkness will take over and be on the winning side for six months. Not so different than how things work in politics but at least an eternal cycle you can count on. One of the little truely secure things in life.
Posted by monique besten at 19:58 No comments:

skin (for the love of trees) 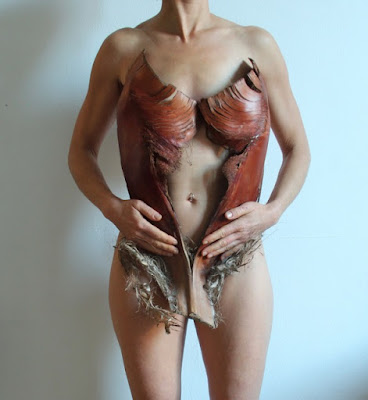 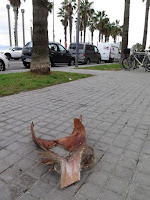 Posted by monique besten at 16:35 No comments: 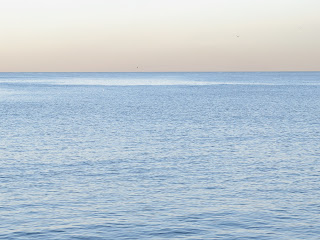 A seagull flew through the moon, its belly lighted up by the sun. A bright square on the wall of a building. A circle producing angular shapes, transformation is at the core of the world.

When I woke up at 4.30 a.m. the sky was still black but the darkness had evaporated and blue sky was on its way. My main reason for being here. In search of blue.

The temperature matched the colour. It was cold.

“I am facing my fears during the hour of the wolf” I wrote at 4.30. But there is only one fear. And it is always the same one. It is the fear that I won’t be able to leave when it is time to go. It is a smaller version of death. But I know there is only one way to deal with your fear. It is facing it and stepping into it. I did many times. I left many times. Leaving is easy. I wrote it many times. But it is easy to write it. I still have to learn how to do it well. But I am getting better at it. Exercises in being here, only to understand that nothing lasts forever. Exercising for not being here. Living is leaving. Letting go. Step by step. It is a beautiful walk. Beautiful and sad. Like all good walks.

I walked to the sea. The city was silent. A holiday. Celebrating he Spanish Constitution. The beach was empty. All the beach bars had disappeared. Only sand. And endless blue. My fear was washed away. Or maybe already disappeared earlier when I closed the door to leave my home.

On my way back I found a book next to a garbage container. Andreï Tarkovskyi’s Journal, French edition. It opens like this (and I’m translating:)

“The Journal of Andreï Tarkovski starts in April 1970. Tarkovski is only 38, his wife is expecting a child, he is about to buy a house in the countryside and his autobiographical movie “The Mirror” is germinating in his mind. In the past, a Lion d’or in Venice for “The childhood of Ivan” and a monumental movie, “Andreï Rublev”. Self-assured, writing: “I’m not afraid of anything anymore”, he decides to focus on writing an intimite journal …. “

Posted by monique besten at 23:25 No comments: