To Be a Reader 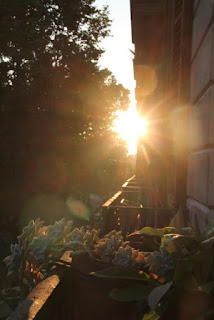 I fell asleep around 11 last night with my doors wide open, the hot day had transformed into a cooler but still warm night. I slept sound. The city noise doesn’t bother me anymore when I am sleeping.
My slow movements getting upright were copied by a small body moving through my room. My housemate’s cat is too nervous to enter my room when there is somebody around but when I’m asleep she often sneaks in to sit on my balcony and get some fresh air. The moment she becomes aware of somebody being present she gets scared though and walks out, keeping her eyes on me in the movement.

I thought about going back to sleep but I was awake. Four thirty. Still dark, quieter than it is during the day, less traffic noise, but more noisy people walking home from bars and nightclubs.

I opened the book I had been reading before I fell asleep, reread the chapter I had tried to finish before my eyes refused to do what I wanted them to do and moved to the next chapter. “A Short Note on the Singularity”. It starts like this: “There is no accepted version of the Technological Singularity. It is a light gleaming above Silicon Valley’s horizon, appearing now as religious prophecy, now as technological fate. There is no end to the riches the faithful claim it will generate, no end to what can be said of them. In the broadest sense, the term refers to a time to come in which machine intelligence greatly surpasses that of its human way, an extreme expression of techno-progressivism, the belief that the universal approach of technology will solve the world’s most intractable problems.” In the former chapters I had read about uploading the brain, how it works according to scientists who have devoted their lives to figuring that out. About the largest of the world’s four cryopreservation facilities where for $200.000 they store your body until the technology has been developed to transfer you out of your useless vessel or $80.000 if they only store your head. It is located in Phoenix, “on the outskirts of a city named after this mythical desert bird, with its cyclical existence of immolation and renewal. It’s a detail at which you reader, would probably wrinkle your delicate and finely attuned nose if you came across it in a work of fiction.”

I smoked a cigarette on the balcony and wondered if in a different container than my mortal fleshy body my mind would have allowed me to fall asleep at an odd hour according to modern world standards, something I like to do and seems to make sense since I am more productive when I follow the natural rhythm of sleeping when my body gets tired and working when it is ready for it. But maybe sleep wouldn’t exist any more in the Singularity. Smoking surely wouldn’t.

Earlier in the book “To Be a Machine. Adventures Among Cyborgs, Utopians, Hackers, and the Futurists Solving the Modest Problem of Death”, Mark O’Connell writes about a lecture by Dr. Anders Sandberg, a research fellow at Oxford’s Future of Humanity Institute and how he spoke of the social and economical costs of suboptimal mental performance, of how misplaced house keys alone -the time and energy invested in trying to find them- ran the UK’s GDP a deficit of £250 million every year.

I stared at the dark sky, listened to the plane trees shedding their skin: tree bark falling on the sidewalk. I slowly moved my blue and yellow left knee with which I had bumped into a glass door last Monday, maybe because my eyesight isn’t as good as it was when I was younger and probably also because I had forgotten that when I walked into the bar (where I only drank one glass of wine, so that couldn’t have been the cause) I passed two slowly opening glass sliding doors. “Our version 1.0 biological bodies … [are] …. frail and subject to a myriad of failure modes, not to mention the cumbersome maintenance rituals they require. While human intelligence is sometimes capable of soaring in its creativity and expresiveness, much human thought is derivative, petty, and circumscribed.” Mark O’Connell quotes Ray Kurzweil here, “an inventor of many ingenious devices … and director of engineering at Google, to act as thought-leader-in-chief for the company’s pursuit of machine learning.”

I have been quite disturbed but completely caught by this book and I can only imagine how the writer, who isn’t a transhumanist and is expressing his own struggles with the subject in beautiful writing, has been feeling throughout the process of researching and writing the book. I finally started reading it properly yesterday and found it almost impossible to put it down. But it was getting light and the sky started to show traces of pink. In the past I used to walk to the beach on Sunday mornings to see the sunrise, in the beginning with a slight feeling of confusion because I was born in a country where you see the sun set in the sea, never rise out of it.
I decided to finish the last few pages of the chapter I was reading and then head off. It was still about Kurzweil, now a description of a documentary about his life, Transcendent Man, where in one of the scenes “we encounter the film’s subject standing on a beach at sunset, his inscrutable gaze fixed upon the serene expanse of the Pacific.” Directly before that scene he had been talking about the last conversation he had with his father before he died. The director asks him what he is thinking about as he stares at the sea. “Well,” he says, “I was thinking about how much computation is represented by the ocean. I mean, it’s all these water molecules interacting with each other. That’s computation. It’s quite beautiful. I’ve always found it very soothing. And that’s really what computation is all about. To capture these transcendent moments of our consciousness.”

I was too caught inbetween a feeling of horror to see the sea -this particular sea- for the first time in weeks, maybe even months, with Kurzweil’s words in mind and a curiousness about whether it would change my perception of it, or maybe more accurate: my feelings for it, to make a move. So I made coffee and sat on my balcony and made the amazing discovery that this time of year in the early morning the sun reaches my balcony shortly after it rises out of the Barcelona sea and then moves behind the buildings after 10 or 15 minutes. Something I never thought would happen, simply because I had moved here in August and have been only aware of the hours and later in the year the minutes the sun reaches it from the other side at the end of the day.

A man and a woman were sitting on one of the benches of the triangular square with the statue of Casanova -not Giacomo but Rafael, icon of the Catalan independance movement. I only saw their backs but they seemed to be in their thirties. They were sitting close together, not so close to assume they were lovers but from their movements and some of the words I caught, I read they most probably were lovers-to-be. A man wearing only shorts and sneakers ran by and his impressive chest reminded me of several descriptions in “To Be a Machine” of scientists researching ways to become immortal that would imply letting go of our body but since they weren’t close to reaching that state, were spending hours (which would be considered lost time in the Singularity) training their bodies in order to try to prolong their life expectancy so they might still be around when solutions would be found.

The two people on the bench fell silent. The silence inbetween a long exchange of words to get to know the other (slightly) better and the first kiss. I thought of Chris Cunningham’s videoclip of Björk’s “All is full of love”, two robots making out.

I watched them kiss, which clearly for them was a more pleasurable moment than the slightly awkward one before, the one I enjoyed watching more because it was such a vulnerable moment. I was curious how it would end, how they would walk away but they smoked a cigarette and started talking again and I lost interest and returned to my book. “Even if it were possible to put aside for a moment the considerable issues of plausibility, and the obviously religious foundations of the whole edifice, the Singularity was not a concept I could ever see myself getting behind. I will admit, that is, that I never succeeded in grasping the attraction of the things, that I never quite came to understand how what it offered -the prospect of a bodiless existence as pure information, or run on some third-party human hardware- could ever be seen as salvation rather than perdition. If life had any meaning at all, my instinctive belief was that its meaning was animal, that it was inseparably bound up with birth, and reproduction, and death.” (Marc O ‘Connell)
When I looked up again the couple had left and a young woman was standing in the middle of the square patiently trying to make her big dog get up. He was clearly enjoying the coolness of the stones, lying stretched out on his side, not moving a single toe. She didn’t want to force him, probably realising how wonderful it must be to lay on the cold pavement in the morning after a warm and sultry night. She gave up, smiling, and just waited until he was ready to go.

The swallows had arrived. They were shrieking and flying low over my head. On my way to the bathroom I passed Gunda, lazy and cute as always, named after the word for “yummy” in Ewokese (the language made its first appearance in Star-Wars VI). In the kitchen somebody was eating a big slice of watermelon.
I felt happy to be alive and to be mortal. Why would you aim for immortality and being around forever when you can experience moments, sometimes even hours, when time doesn’t exist and it is there already?

(all quotes from “To Be a Machine” by Marc O’Connell)
Posted by monique besten at 10:00