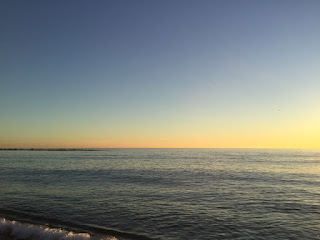 He was sitting next to a green tent on a foldable chair, drinking coffee. There was a similar tent a bit further down, exactly the same size, same shade of green. Probably the cheapest ones on sale in the Decathlon. A big dog was sitting next to him. He had his back turned towards the sea which didn’t make much sense. The sun was just rising.
He didn’t look like one of those fucked up tourists camping on the beach after a long party night. It isn’t allowed but the police don’t care. The beach cleaners don’t care either. I don’t know if, when you are a street cleaner, you are happier when your working area is in the sun and you stroll along the waves while doing your job or if it is frustrating because the contrast is so big. Maybe they don’t think about it, maybe they just do their job. Sometimes I talk to them, when there is a mystery they might be able to explain. When the beach is covered in things I can’t place. Like thousands of sea cucumbers, complicating their job. Because they have to put anything that could bother the tourists in plastic garbage bags. There is no difference here between empty plastic bottles, jelly fish, cigarette buts, and by-the-wind-sailors. It all has to go.

The man turned around and only then did I realise he was the owner of the five meter long dragon next to the tent. He was guarding him while he was sleeping. The man guarding the dragon, not the other way around. He had wings and a long tail, scales all over his body and triangular fins allong his spine. He looked like the dragon that lived in the attic when I was a child. In my imagination. The only difference was that this one wasn’t green. It was brown, the colour of sand. Later on in the morning flames would be coming out of its mouth, to make the tourists pay more. The man was one of the regular dragon builders on the beach. In the last years the dragons have multiplied and have become more refined. I wanted to take a picture, steal an image but you can’t when you don’t pay. Not when they are being guarded.

The sun had let go of the horizon by now, detached and shiny in a cloudless sky. The red was only a memory, some vague traces of pink and orange where the sea ended and the sky started. I am always in awe when I watch the sunrise here but I prefer the stillness and the strange shade of blue when dark turns to light. The hour before it happens. The sense of newness, the expectation of a new shiny day.

A father was collecting stones with his son. A mother was so keen on getting nice photos of her one year old daughter crossing the beach running that she only managed to get a hold of her seconds before she was about to run into a biker passing by on the boulevard at full speed. Three brave girls were swimming, their backpacks abandoned on the beach. I hoped they would still be there when they came out of the water.

Barceloneta was waking up. While walking to the bakery I thought about the Catalan tv series I had been watching recently. Nit y Dia. Noche y Dia. Night and day. The scene with the man who didn’t know how to make up with the woman he loved and had been fighting with. His female collegue advised him to just bring her croissants. “La función de los cruasanes será decirle “te quiero”, the subtitles said. The function of the croissants will be to tell her “I love you”. It is how I celebrate this city. I sit on a terrace not long after sunrise and eat a croissant. The baker got mine straight out of the oven with big heat resistant gloves that looked like you could go to war with them. My regular corner table on the market square was free. The women were already there, as always looking as if they just came from a dinner party even though it was only 9 am. Nicely dressed, red lipstick, their walking aids parked next to their chairs, calling everybody “cariño”.

There were still 2 days to go before the new year would start officially, today included, but I didn’t care. I decided to start my new year today.
Posted by monique besten at 17:13