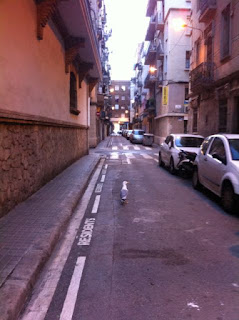 The homeless were still asleep. In the hollow between the tall buildings where the fundaments of the old city wall are still visible two persons were huddled up in a red and a blue sleepingbag. Next to the entrance of one of the buildings a tent occupied the porch. It was 8 ‘o clock. 17 minutes before sunrise.

I crossed the big road and followed a sea gull. He was a resident here and I guess in a way I am as well. I chose the right side of the street. The left side. The side that said “RESIDENTS”.
A big black dog was waiting outside the corner bar for his boss to finish his drink. An old woman had just finished scrubbing the sidewalk in front of her home and emptied the bucket in the gutter. The water ran in my direction, away from the sea.

The golden light flooded the buildings. I was too late. But it didn’t matter. As long as the sea would still be there. I tried to imagine arriving one morning and see nothing but a muddy basin with half dead fishing gasping for air in big pools of leftover seawater but I couldn’t really.

And there it was. Wild today. A big cruise ship balancing on the thin line.

There was a new addition to the sand sculptures. Tres Reyes Majoos. The faulty extra “o” didn’t matter. The kings looked splendid, carrying their gifts and holding plastic bottles that kept the wind away from the candles inside. In the center, Homer Simpson had passed out on a comfortable sofa, an empty beer bottle in his hand, one of his feet leaning on a dog. Next to his head there was a phone and on the other side of the sofa, a small table with a vase on it. The flower in the vase was real. All the rest was made out of sand. The belt that held up the trousers, the dial phone, the folds in the sofa, Homer’s open mouth, the dog’s tail standing upright because the heavy shoe crushed his body, the curls in the beards of the Kings.

The Meter of Shame had been reset. 2019: 0. No mentioning of the 2242 drowned refugees in 2018 or the 3116 in 2017.
It smelled like fire on the beach. And it was hazier then normal. When I walked down the steps back into Barceloneta I saw the dark clouds. An apartment on the top floor of a building was covered in smoke. The street was blocked. Three fire trucks tried to get everything under control.

Around the corner it smelled like freshly baked bread again. All over the city people were starting to line up in front of the bakeries now to get their 3 Kings Cake. They arrived yesterday, the Kings. I hadn’t seen them but I accidentally had tried to cross the central part of the city when the parade was about to start and I only realised my mistake when I saw more and more people walking in the same direction I was walking in, carrying step ladders. When the Kings arrive the sidewalks are so cramped that the only way to see something is to be there an hour in advance or bring your own stairs.
Like in other years there had been some discussion beforehand about Melchior, the black King. He is often played by a white person using black make up which of course doesn’t make a lot of sense. In the Netherlands there is a similar discussion happening before Saint Nicholas which is more serious though. Saint Nicholas assistants, the Black Peters, have also been played for decades by fair skinned people wearing black make-up but what is worse is that they are his servants and they are portrayed as unintelligent, silly characters, punishing children who haven’t behaved well enough during the year. At least Melchior is a King, the King of Arabia and equal to the other two, Balthazar who according to the legend ruled Tarse and Egypt and Caspar, King of Sheba.

The terrace at the market square was still quiet. The old women were already there, they always arrive when the doors open at 9. The waiter greeted them. “Buenes dias reinas!” The Queens of Barceloneta. They indeed looked like they deserved that title. 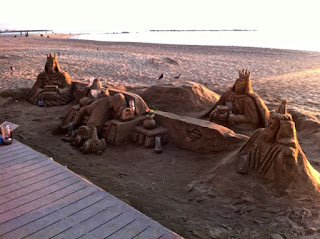 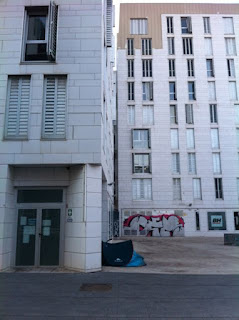