On the nature of daylight 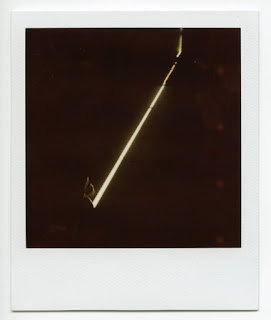 The light was on when I woke up at 7 and I turned it off to enjoy the darkness before going outside and see the start of the day. When I got up half an hour later it was still dark and when I walked through the house I heard the rain outside. It hadn’t rained like that in maybe more than a month. Not a good day to walk to the sea. I stepped outside on the balcony instead and watched the neon lights of the 24 hour corner shop changing colour every ten seconds or so. Its noisy display of light is the opposite of the Turrell installation that is on my regular route, a dark corridor bathing in a deep shade of blue with a red circle resembling the sun and golden light surrounding the closed entrance. The beach would be empty today and the sun would be invisible.
The street lights flickered, a police car drove by, the flowers of the Cosmos moved gently in the wind. From the far end of the still silent street an enormous vehicle drove up and halted in front of the red traffic light. A  yellow truck on big wheels with an extendable metal construction on a heavy platform. I read the letters printed across the metal arm. “El Rayo Amarillo”, the Yellow Ray, entering the city in the last minutes of dawn, the yellow ray still in folded state.

What to do if I wasn’t going on a walk? I decided to start the day by watching Mary Oliver again, reading “Wild Geese”. I am not as huge a fan as many people are, but I do admire her and when I read about her death last Wednesday I remembered the poem and listening to her inbetween studying for my Spanish exam I realised what I knew already, how the soft animal had missed the early sunrise walks because the obedient human being had walked to school every morning to learn new grammar rules. The same distance but in a different direction. The same intention: to embrace something new. But to be at the edge of the day in a state of wonder is better for the soul than to be on the edge of B1 level wondering whether the form for to be (for which there are two words in Spanish) in “to be dead” should be the one for a temporary or a permanent state.

Speaking is the hardest part. For me. Not for most people. That is why most people tell me I should  speak more. And that is why I sometimes wonder if I am trying hard enough. If I care enough.

What is the best way to get somewhere? Is there only one way to show that you care? How do you learn? What is the role time plays in all of this? Are detours distractions from reaching a goal or do they help to understand what it really is you want so when you reach your goal you are not lost, you know where you are, where you need to be?

My goal isn’t to speak Spanish. My goal is to know the language. And speaking is only a part of it. I go about it slowly. With care. Con cuidado. I sometimes try to do it in the way I am told I should. But I am at loss if I have to remember words I can’t connect with. I have to get familiar with them. Be able to move around in them. Allow them to make them mine. With some it is easy. Miedo. Mano. Cielo. Andar. Izquierda. Amorar. Possibilidad. Morir. Vivir. Trasladar. Others need to be unstuck from words I know in a different language. Even though I have been asked hundreds of times if I want the milk in my coffee “caliente”, I still haven’t managed to automatically think “warm” - simply because the english “cold” is closer to the spanish word for warm than “warm” is - but I need 2 seconds to realise what my mind is doing before I answer “sí”.

I wish I could speak more in depth with people who don’t speak any of the languages I master. Sometimes we apologise in each other’s language of choise at the same time but I do think it is my responsibility to learn the language that is spoken here, not theirs to learn English. It will come. Bear with me. I am getting there slowly. Because I love learning this language. But I need to do it in my own way and in my own speed.

Going to school again teaches me many things apart from grammar and gives me an insight into other things apart from this new language. Some things I knew already but are good to be reminded of. That you should never make your students feel ignorant and small and get angry when they ask a question you think they should know the answer to. They wouldn’t ask it if they knew the answer. That is why they ask you. You should be glad they ask.
When you study a language you get points for using the past tense in the right way. You don’t get points for trying to inform yourself about the political and social situation or getting more knowledge about history and culture. I’ll never forget how one of the students asked “Who is this Franko guy that keeps popping up?”
There are better ways to teach than how it is done traditionally. I thought it was quite ironical that during the exam we had to read a text about researchers explaining how exercises and homework have a much better result when it stimulates the students’ creativity when I had a hard time some weekends trying to write down the recipy for tortilla, my dream holiday or my hobbies. I was quite eager to write but not about those subjects.

One of the things I struggled with was dealing with the labels. Having to label things and being labeled. “Who do you think has the most interesting life?” The musician who tours around in Europe and dreams of being on tv, the head of a language school who spends his evenings reading books and writes for the local newspaper, the mother of 3 kids who tries to find more time for her yoga practise or the digital nomad who just spent three months in Thailand and is about to fly to America? I know I get myself into trouble if I say (again) “I don’t know. It is all equally interesting, all in a different way.” So I try to just choose one. Because it makes things easier. And learning Spanish is already hard enough. Or being asked (again): “How is that in your country?” Or being told I make a mistake when I say “my boyfriend” because I’m married. Or having to read examples about couples that are always a man and a woman. With a son playing football and a daughter in a beautiful dress.

Still, it is a good school. And I don’t rule out I’m a bit peculiar in how I approach things. I’d recommend it to anyone. I learned a lot. And there is still a lot to learn. But I might skip a semester and read Spanish books and newspapers and respond my friends who write me in Spanish without using Google Translate. And spend time in remote villages where there is only the choice between Spanish and hand & feet and I won’t feel sad when I can’t express my opinions about “important matters” because the important matter will be to be there and talk about small daily events.

During the exam I got distracted. The video we were shown and had to answer detailed questions about had a soundtrack. It was Max Richter’s “On the Nature of Daylight”. Often when I listen to his music I think that it is too beautiful to be good. Too easy to be drawn into. This particular song has been extensively used in cinema and is probably best known from the movie “The Arrival” but it is already 15 years old and last year, when The Blue Notebooks - a protest of the Iraq War - was re-released, he made his own visual interpretation for the song that made its debut on this album, in a video starring Elisabeth Moss.
I am always suspicious when something is very beautiful and seemingly easy to fill your head or heart or both but the only test to know its value is to see if you return to it. Which I did. And still do. When I listen to it I get lost in it. I listen to it when I need to disappear for a few minutes. Which isn’t wise during an exam. “Fuck this exam” I thought, probably in English, because the only time Spanish has popped up unconsciously so far has been in my dreams the week before the exam and when I have to speak French - because it is the other language in which my words don’t flow fluently. I then got distracted by this thought for a bit but I knew the value of the exam was that it had made me study so I returned my attention to the video and got lost in the music again. I don’t know how much I missed, maybe not even 10 seconds. Maybe the answer to one question. Maybe I’ll think about it more if I’ll fail the exam by 1 point. Or maybe not.

There is another video that accompanies this song. It is in black in white, it shows the man who composed the song and the musicians who make it. I know the correct way to say it is “play the song” but what I see is how they make it. With their hands and with their eyes. Out of nothing. There is no mystery about how it is being made. You see the musicians and their instruments. The instrument cases. The composer behind the glass window. The studio equipment. I know they will play it perfectly but every time I watch it I feel the concentration and I get slightly nervous, afraid they will make a mistake. Even though I know they won’t. It is a video. I’ve watched it at least 10 times before.
You see how their eyes make contact, you see the trust in Richter’s face, the turmoil hidden in his fingertips.

In the video a word is added to the title of the song. Entropy. Entropy refers to the idea that everything in the universe eventually moves from order to disorder and entropy is the measurement of that change. It comes from the Greek “entropia”, transformation or a turning toward. For Richter the song is a reflection on his own childhood, it is about the fantasy space that children sometimes retreat into. “An alternate reality of safety, quiet and sanity. I never imagined that the piece would have a life outside this context. It was so personal.”

A lot of personal things are universal but you still have to be a master to transform them in a way that turns it into a piece of art.