I don’t know why I hadn’t seen it before. Or maybe I had but I had failed to recognise it. My first thought was that is was new, although I couldn’t imagine it was. And the bronze placque in the street told me it had been here even before I visited the city for the first time, more than two decades ago. Deuce Coop, 1992. James Turrell. I remember my first Turrell experience. It was in a room that seemed to be completely dark when I entered from the brightly lit exhibition hall but when my eyes got used to the dark, slowly the space started to come together, revealing a triangular, wedgeshaped room, or more like a big alcove, bathing in soft blue light. The light source was nowhere to be seen. Time slowed down. It was like being in a dream.
I had seen his installations before, but only on photos. They hadn’t made a very big impression but being in that room I understood why. Without the experience, without actually seeing the light, there is merely theory and esthetics. You can understand its meaning and imagine its impact but you don’t really see.
On my wishlist is a work of his that is permanently accesible in the dunes in the Netherlands. Celestial Vault is a place to gaze at the sky. A bowl in the shape of an ellipse, an artificial crater, made out of sand. The slopes on the inside are covered with grass and in the middle two people can lie on a natural stone bench. In this position, looking up, the sky seems to be a vault. Light and space themselves become the objects and the act of observing makes the observer experience his act.

It was the yellow light creeping under the door that had drawn my attention here, at dawn, walking through Barcelona. As if there was a secret inside. And because the doors had long narrow openings in them I could look inside and see the blue light in there, the red round shape high up in the space, symbolising an oculus (a circular window or opening, which is often said to symbolize light itself, or the life-giving sun), the analogue for the pupil of an eye. Turrell uses the oculus a lot in his work.

I couldn’t linger long. The sunrise wouldn’t wait. I continued walking in the blue morning light and I arrived at the beach just before it appeared. I had seen this before. But never before twice in a day. 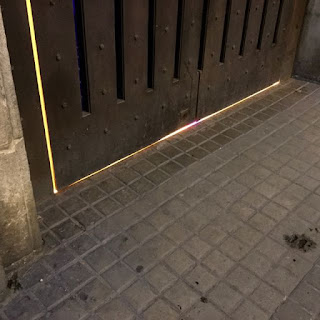 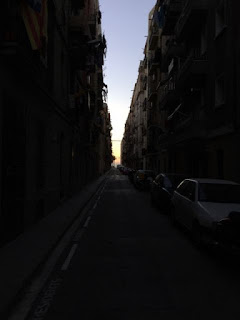 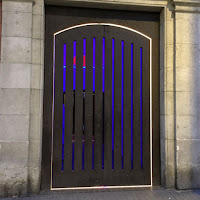 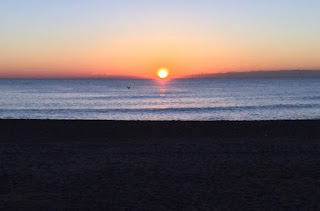