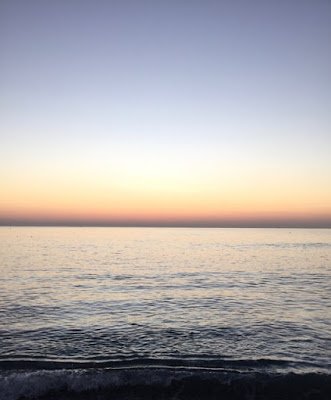 It is the moment before the sun rises that is the most precious one. The clarity and the silence, the world in anticipation of the spectacle that is about to begin. "The most ordinary thing in the whole cosmos." It is the moment when I miss the dog that will appear in the sky tomorrow.

Weather forecast
Tomorrow we will see unsettled and unusual weather.
Instead of the sun rising at 05:24, a dog will rise,
a fiery red dog that will climb up through the sky,
wearing an iron chain round its neck,
and it will growl at the clouds
that will hastily make room for him.
At 13:37 he will be at the zenith and bark,
he’ll bend forward and chase everyone inside
with his furious scowl.
‘The dog is shining! The dog is shining!’ everyone will whisper,
but the dog won’t shine, the dog will yank at his chain
and bare his teeth.
Late in the afternoon he will descend to the horizon and howl.
Everyone will emerge again,
sit down on their benches outside their houses and say:
‘O dog, why are you howling . . . ’
People will want to pat him and console him
or give him something to eat.
But no one will be able to reach him
and everyone will close their eyes and let the howling
wash over them.
At 21:51 the dog will go down and never return.
The day after tomorrow the sun will shine again,
that big, round, dazzling thing that everyone knows,
the most ordinary thing in the whole cosmos,
that had already existed for billions of years before there was any mention
of a sky or a firmament,
and that does nothing but rise, set and shine.
It will be a pleasant day.
But should you wonder, the day after tomorrow, why you’re so sad,
it will be because you miss the dog,
the dog that will appear in the sky tomorrow.

Original in Dutch & video of Toon Tellegen reading it here: https://www.poetryinternationalweb.net/…/item/…/poem_english
Posted by monique besten at 07:55