“Some people would rather have wings but we don’t, we have feet. We were born to walk. Scientists say that walking gave us our brain capacity, walking turned us into the human beings we are. Walking made it possible for us to have the desire to fly and to come up with ways to turn our dreams into reality.

Walking made us fly. We can go anywhere. Still the easier it becomes to move through this world, the more disconnected we seem to get from it. We have to land again. Get close to the things. Be part of the world. Walking teaches us where we are, who we are. A slow speed makes our brain work fast. Makes us see more. Be more. And best of all: walking makes time disappear.”

People sometimes ask me if I have a next walk planned. I hadn’t so far. The last long solo walk resulted in a neck hernia I am still recovering from and spine problems my manual therapist thought were caused by a car crash. I don’t regret the price I payed for doing my extreme walking projects, and not being able to walk intensely and carry my house on my back gave me the opportunity to write more, teach more, be at home in one place and think about next steps slowely.
My feet have been itching though. And my mind as well.

After my first long walk from Amsterdam to the Nomadic Village in the south of France (2013) and shortly before going on the second one, a 1346 km. walk through Europe during which I had wonderful encounters and conversations with all sorts of people, I wrote an article for the Dark Mountain Project. The quote I started with is from that article. It finished with these words:

“Here I am. Sometimes I don’t see the sky all day because my city apartment is on the ground floor. Sometimes I don’t see my friends for weeks because they have to earn money. Because I have to earn money. Sometimes it feels as if the only way I add meaning to the world is because I pay taxes. Sometimes I follow the rules and feel unhappy, I go through the motions and feel like I wasted my time. People tell me that this is how the world works. Some of my good friends even tell me that. And if that makes sense, then walking the world in a three-piece walking suit might make even more sense.

I’ll get my things together.”

Some things have changed in the meantime. I can see the sky from my desk and I live in walking distance from the sea. I mean “normal” walking distance. Half an hour. I go there most mornings before sunrise to be able to survive the rest of the day in the middle of the noisy city.
Some things haven’t changed.

In 2015 I walked from Barcelona to the COP21, the big Climate Conference in Paris. In a business suit, without planning ahead, surviving on the road, sleeping outside, talking to people I met by chance. There was an excited atmosphere when I reached my goal. Everybody in the city had the same focus. In a different way though. The politicians pretended they were making change, doing something about the ecological crisis we’re dealing with. The activists were working hard to do something about the same problem, calling to attention that all the politicions do is make fake promises and no real action is being taken.

I still don’t know if my participation in all of that made any difference and if I did it for the right reasons. When I arrived in Paris I had the feeling that being on the road slowly to make connections and put my trust in the world was more important than my direct protest in the streets of Paris. It was important to walk towards a goal though. That particular goal.

The COP26 in 2020 is likely to be a critical summit, marking both the full adoption of the Paris Treaty and the date by which countries are expected to come forward with strengthened national action plans. It will also come just weeks after the next US election.
I’ve got the feeling that since the COP21 there has been a heightened awareness of the serious problem we find ourselves in because people are starting to realise the world as we know it will come to an end if nothing will be done. Most people don’t really know what to do though. And it isn’t that simple, especially not when the people in power don’t really work on it and every day more news is being published about pollution, species disappearing, ice melting, forests being cut down. There is “climate change depression” and “environmental melancholia” but there are also a lot of people who don’t worry too much, believing there will be a solution even though it is probably already too late for that. What is promising though is that the new generation seems to be more willing to take action. Promising and sad as well, because they aren’t responsible for the mess we find ourselves in. I know that I will probably die before the shit really hits the fan and I had a pretty carefree childhood but when you are growing up today, your future looks quite bleak.

Maybe it is time to get myself ready again. To see what the state of the world (or at least a part of it) is from a closer view. To hear what people have to say.

November 2020 I will be in the city where the COP 26 is being held. Somewhere in Europe. I’ll walk from my hometown. I’ll report from the road. This time I’ll have more time to prepare myself, but I’ll walk as unplanned and vulnerable as always. I’ll keep you posted. 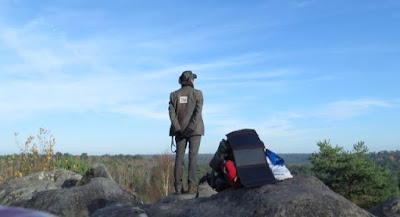