A stone protruding from the ground 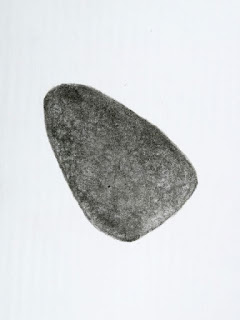 There was a small stone in my mail box. It was sent to me all the way from Serbia. Freya Gabie had passed it while walking into Čačak and picked it up. It was dark grey, although that might not have been the original colour. It could have been brown or more blueish. Four centimeters long, flat at the base and narrowing towards the rounded top. The kind of stone I like to hold in my hand. It was light as a feather.

I googled Čačak. It is located in the western part of central Serbia, within the region of Šumadija. Once densely forested, today the region is characterized by its rolling hills and its fruit trees. It has around 75.000 inhabitants and is near the Ovčar-Kablar Gorge, which houses 12 different monasteries. The original name of the town was Gradac, which means “little town”, used when it developed around the Moravski Gradac monastery but in 1409 it was mentioned in an official document as Čačak. The word has disappeared from the Serbian language today but dictionaries from the 19th and 20th century and works from major linguists mention the word čačak, meaning lumps of frozen or dried mud or lumps of stone protruding from the ground. I don’t know if Freya knew this when she picked up this stone.

The stone was there already, maybe not in the same location but in existence, when the refugee Pavel Kiprianovitch walked from Bulgaria to France, carrying a Nansen passport. They were internationally recognised refugee travel documents, used inbetween 1922 and 1938, first issued by the League of Nations to stateless refugees. They got their name from the polar explorer and statesman Fridtjof Nansen who promoted them. It was the time after the first World War, four world empires had been destroyed: the German, Ottoman, Russian and Austro-Hungarian and many people were displaced. Around 450.000 Nansen passports were distributed, famous holders of Nansen passports include Robert Capa, Marc Chagall, Vladimir Nabokov, Sergei Rachmaninov and Igor Stravinsky but most of them were people like Pavel Kiprianovitch, whose name is only known because his passport is still there. He was 34, of normal constitution, average height, he had brown eyes, blond hair, an oval face, no moustache or beard. Profession says: ouvrier, worker.

Freya Gabie, an artist from the UK, retraced his journey with the help of his passport. His route, from Bulgaria northwest across Europe, is the same that many displaced people today are making from the war-torn countries of the Middle East, a further reason for Freya to explore it. For those current displaced people, sadly, there is no Nansen passport to help them cross borders and make their journeys easier and safer.

It is unknown what Pavel saw when he made his way through Europe. Freya took photos while travelling and I looked at them on her website. A lot of things must have been different when Pavel was on the road but some things haven’t changed. The stones were already there then and have been long before Pavel and other refugees moved around, trying to find a new home. Silent witnesses, drawn with care and attention and sent around by Freya while she was travelling.

I don’t know much more about Freya then I do about Pavel. I know what she looks like in more detail because I saw her photo on Facebook. There is no photo of Pavelon on his passport, just a description. I never met Freya, she reached out to me when she was preparing her journey, one artist keen on building bridges between the past and the present writing another artist who is doing something similar. I thank Pavel Kiprianovitch for that. I am honoured to have received this stone. 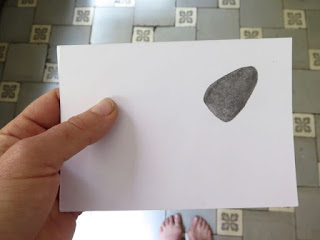 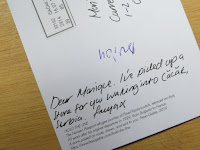