One way to (not) enter home 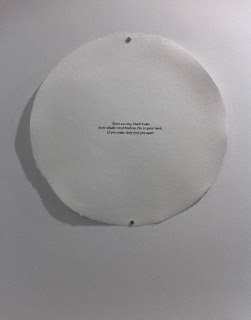 I am a book addict. I taught myself a long time ago that when I fall for a book in a bookshop, I go home without buying it and if it stays on my mind long enough I will go and get it. Or order it online. But it is better to go back to the bookshop and hold it in your hands again. Maybe put it back once more but if you return for it again, it will be yours.

There was a book once in the bookshop next to the CCCB, the Center for Contemporary Culture in Barcelona I broused through every time I came there. It was the title that had attracted my attention. And the small drawing underneath it. Modos de (no) entrar a casa. Ways of (not) entering home. A drawing of a house that was a rain cloud, an umbrella holding the house or catching the rain. I wanted to buy it the first time I saw it but I didn’t. And I didn’t all the other times it winked at me. If it would have been in Engish I probably would have but it was a few years ago and my Spanish was not sufficient and I told myself that was a good reason to buy it because I could use it to learn but I also knew there were still a couple of unread Spanish books on my shelves I had bought with the same excuse.

After a while I forgot about the book.

Today was a hot day. I wanted to leave the house. I didn’t want to leave the house. It is often like that. I wanted to be elsewhere but I didn’t want to go. There was a performance by a writer and visual artist I like. I don’t know her work very well but I read her last novel, Brother in Ice, originally written in Catalan and I liked it a lot. Before the book there was a series of exhibitions in which she explored the explorations of people who were obsessed by the poles. The cold and white far south and north. The book is a mix of stories and facts. Science and fiction. But really the opposite of science-fiction. Heading into the other direction. Not out there but deep down. Inside. Into a similar unknown. Dark as a black hole. Or bright as a white one.

I went. This time it was closer to science-fiction. A performance about the possible relationship between a woman and a non-person. About Artificial Intelligence. A woman in a bed and a drone flying over her head, landing next to her. Her soft back almost touching the cold metal of the machine. In the gallery space there were drawings that looked like scientific drawings. Wormholes. A text as a drawing in a circle.

There are tiny black holes
their whole event horizon fits in your hand
If you enter, they tear you apart

There was the documentation of her communication with the gallery owner.

“So for people like me, who are dedicated to mining the precious metals of the soul, there is no choice but to get into difficult areas, deal with heavy metals and witness or experience certain collisions. And even enter that horizon of events that seem to throw us from one dimension to another. Those clears lines that are in science manuals that define where the boundaries of things are and tell us their name should exist (that's why I like scientific drawings so much, because they make the world soothing and understandable, even if the lines are so human and fictional).” *

After the performance I went to get a beer at the entrance of the gallery. And there was the book. Modos de (no) entrar a casa. By Alicia Kopf. Of course. I asked the woman handing out the beers if I could buy it. She told me they had only this one, it was not for sale and as far as she knew, it wasn’t in the shops anymore.

Next day I went to the place where I had seen it first. Nothing. I checked online. Sold out everywhere. Maybe it will be reprinted one day. Or I will find an old one somewhere. Until that day I’ll enjoy longing for something I could have easily had. Or maybe not. “If I would have known …. “ is useless. Politicians misuse it often: “With the knowledge we have now we wouldn’t have …. “

It is often like that in life, timing has to be right. There is nothing you can do about that. You can look back and regret but it is better to look back and smile.

* my own translation in English
Posted by monique besten at 14:35