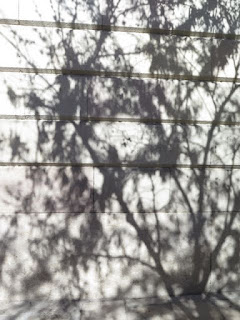 On what promised to be the first really warm and sunny day of many more to come, I found a long rainjacket that looked like it was almost new and a red woolen winterdress, neatly folded, lying next to one of the garbage containers on my regular route to the sea. I once spent a summer in a Swedish forest where people were so busy preparing for winter that it was hanging over the warm season like a big shadow. Here it is different. When spring arrives, people remove the wet and cold days out of their daily lives. I picked them up.

I passed the landmark between beach and city that tells the sad story of men and women trying to cross the Mediterranean to find a safe place to live. The last time I passed it, it read 2018: 497. Today the number had changed. 2018: 498. A small difference. Only one. It is close to nothing. But this man or woman or boy or girl only had one life.

The sea was calm, the sun already up in the sky, the dogs were noisy and nosy. Some people have their regular place to sit on the beach, like I do. We recognised each other.

I returned to my book, Patrick Leigh Fermor’s “A Time to keep Silence” and read “…. the rule of silence is absolute. A special deaf and dumb language for cases of necessity has been evolved and codified, and the entire lifetime of a laybrother, who does not participate in the singing of the offices, may pass without the uttering of a word beyond the confessional or his spiritual consultations with the Abbot … a mythical agendum in the duties of a monk is the digging of his own tomb, a few spadefuls a day.”

A friend joined me at the sunny terrace. She had been practising the bodhrán on the beach. It is also known as Deafening or Thundering drum.

I walked back. The small pink flowers on the square were withering, it looked sad. But the trees were still blooming and the shadows were beautiful. 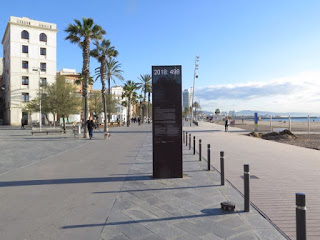