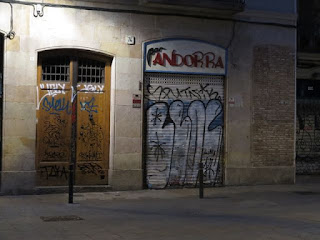 Since the first time I thought the word “Bar” next to the name of restaurant Andorra looked like a P, I can’t read it differently and in my mind the two r’s become one. I’ve been in this small box-like place a couple of times and pass it often but I’ve never seen anything catastrophic coming through the door there although for horse lovers who read the menu it might be a dark place. I had some enjoyable evenings in there but in the blue morning light and with the graffiti-covered shutter closed it does look like a life-size version of Pandora’s box.

Even though it is a holiday, or maybe because it is Easter Sunday, the streets are quieter than they normally are. It is hard to say if the people I pass here and there are early risers or didn’t get their sleep yet.

The blue moon - it is the second full moon this month - is hidden behind pink clouds. The sun will rise shortly.

And so it does. Captured by some tourists. Like I did when I was still inbetween being and not being here. I never liked the photos afterwards. Colours that are only beautiful when you see them in real. Light that becomes kitchy in 2D. Proof of something you don’t need proof of. The sun is only halfway through its life, it will probably do the same thing for another 5 billion x 365 times.

To weaken my argument I take a photo of the line between the sea and the sky without the sun in it. It is there every day as well, 24 hours a day even. Why take a photo of it? I don’t know. I’m intrigued by that line and how on the photo it becomes a proper line whereas in real it isn’t, only in my eyes. 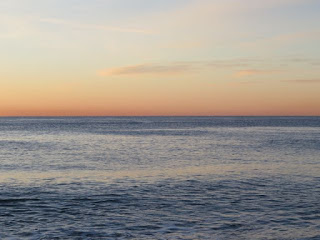 The palm trees in front of the hospital have shedded more of their skin. The pieces look like wooden corsets, human-size. A while ago I took one home and tried it on. It fitted perfectly.

The stairs are covered in small wings. As are the squares and sidewalks. They are in the gutters and porches. Every day there are more of them. Seeds. I take some home every day. They pile up on my table. Old wings.

When I walk back home Andorra’s interior is lighted, I open the glass door, order a coffee and think about Pandora. According to Greek mythology she was the first human woman created by the gods, on the instructions of the god of the sea, Zeus. She was molded out of earth as part of the punishment of humanity for Prometheus’ theft of the secret of fire. The box wasn’t really a box but a jar (pithos) and when she opened it she released all evils of humanity, leaving only Hope inside once she closed it again. 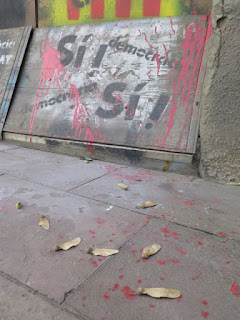