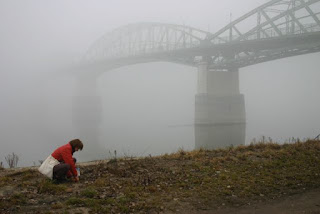 An old story. Because the world is in turmoil, is always in turmoil and inbetween all the sad things that are happening everywhere it is important to remember that there are just as many, or maybe even more, beautiful things happening. Often it is in small things, in small encounters.
An old story because a friend told me that somebody she knows is on her way to a place where I spent half a year of my life, on the border between Slovakia and Hungary, being a Bridgeguard but in a mental way. Creating new connections while moving inbetween different worlds, often literally moving inbetween different countries. “So wonderful how we are all connected to and through places and people somehow” I wrote to my friend and to her friend, on her way to where I once was, I wrote: “Be careful when you arrive, they have strange Easter rituals over there!” I tried to find my writing, 13 years ago, about how at Easter they ring your doorbell and when you open, sprinkle you with perfume or water, and how you are in danger of being gently whipped with young branches but I couldn’t find it on my BridgeGuard blog. I did find some other stories I had almost forgotten. This is one of them:

I didn’t know him at all. And here I was, eating his biscuits, drinking some strong homebrewn liquor. Wondering who put the fresh flowers on his table. Admiring the small painting which reminded me of Francis Bacon. I was looking straight into a young man’s mouth.
He told me he had been fighting in France in the Second World War. There was a moment he considered the option of fleeing to Belgium. But he couldn’t get the image of his parents out of his head. He had to return, if only to see if they were still alive. They were then. But not anymore. Of course. He was 84 now. Still living in Sturovo.

I had been on my way to the other side. But things don’t always turn out the way you plan them. I filmed a garden behind a long wooden fence. At the end of the fence, a man stood in his doorway. If you film somebodies property and he invites you in, you can’t refuse. Besides, if you are on your way to the other side, a chance meeting can’t be a coincidence.
He poured us another drink. It was three o’ clock.

He used to be a “menegdzser” (read this out loud and you will know what the Hungarian word means). He travelled at a time when most people couldn’t. He had been in Amsterdam before I was born. Before my mother had even kissed a boy without any other intention than to tease him. He tried to find the name of the hotel he had stayed in during his days in Amsterdam. But the memory was buried under other memories. When you are 84 they pile up. Hide themselves between more recent ones. He took a new one. “Julia, wie Julia Roberts. Sie ist acht Jahre alt.” He got that look in his eyes grandparents get when talking about their grandchildren. When you can’t walk as fast as you used to, they do the running for you. Maybe even the living.

At four 'o clock she walked in, Julia, just like Julia Roberts. She brought her aunt with her. I knew her. She had brought me beautiful flowers once. Probably from the same garden that got me into this house.

She offered me some homemade cookies. They were delicious.

(image from Biological Graffiti, planting flower bulbs to mark my territory)
Posted by monique besten at 19:58