I saw Elvis. He was running a marathon. He was wearing what looked like blue suede shoes. And his iconic white suit. He only had another 5 kilometers to go. His black hair was impeccable.

Around 11.30 it was mainly single men. Small groups now and then. The fastest ones. Their passing in front of my balcony was announced by big drums a couple of hundred meters down the road. After 12 there was a continuous stream of runners. Some of them had wheels instead of legs.

A man dressed like spiderman passed by, in full costume, his head completely hidden, sweating like a maniac. The people along the road were cheering, some of them waiting for friends and loved ones, carrying banners with names on it. Some were there for whomever passed, trying to keep them going, putting almost as much energy in their cheering as the runners put in their quest.

I always find it touching to watch. Friends sticking together and adapting their speed to the slowest one. A young boy running along with his mother for a short stretch of the route. A man with a running buggy, I couldn’t make out if there was a baby in there asleep, hidden under the blankets. A man running with his guide dog. Two young guys with a cardboard sign and bottles of massage oil, ready to treat anybody's tired leg muscles.

What I first thought were a father and son running hand in hand were two men connected by a small piece of rope they were both holding. The young man was blind or had bad eyesight and his older running partner kept him on track. The man in the golden cape wasn’t pretending to be a super hero. It kept him from getting undercooled. He just came out of an ambulance and was escorted to a taxi where two of his running mates were waiting for him, neither of them would cross the finish line.

Around two the pace had slowed down. Most people were walking, some of them still making running movements with their arms and legs but moving in a speed that was probably slower than their normal walking speed. Slow motion runners. The audience had thinned out as well but some of them didn’t give up either. They knew they were needed. 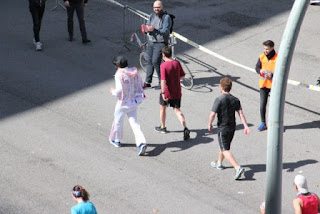