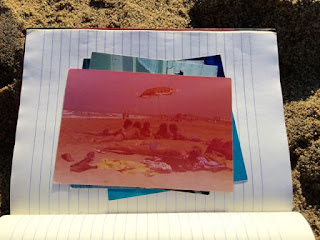 The policemen with big guns on my daily route are new. I pass a van and three vigilant men when I am approaching the train station. The entrance to the park a bit further down the road is blocked completely. The Catalan Parliament building is situated in the park. I sometimes take that route back home but clearly not today.

The jacarandas are blooming. Under the trees small delicate flowers form a pink carpet on the square. The space next to the old Roman city wall is empty. The young homeless guy who was there all winter moved a while ago but I still expect to see his improvised bedroom when I pass the big hole inbetween the tall buildings where he had made himself at home. Just after he left there were still two small suitcases in another corner, not hidden very well. They disappeared at some point.
In Barceloneta, the area closest to the sea, I find a coin on the sidewalk. I want to pick it up but it is glued to the tile. I never saw it before but it might be because I often look up here, at the laundry hanging from balconies. Sometimes a sock comes floating down.

The first beach bar has opened. Earlier in the week they were still constructing them. I will miss the empty beach and the silence. The cleaners are out already to remove the trash tourists left on the beach. A man with a metal detector is looking for treasures. I know where mine is. That is why I walk here most days early.

From a distance I see something lying at the spot where I usually sit down to look at the sea. It looks like a book, it has Chinese characters on the cover and seems to be a menu from one of the nearby restaurants but when I open it, I only see empty pages. It is a notebook with the first pages torn out. There are four old photos inside. The first one shows an outdoor swimming pool with five children. On the next one a young man is lying in a playpen, either fixing something or pretending to be a baby. In the third one he is on his knees in an oldfashioned interior, staring at what looks like a big radio or heater. His tie is almost touching the floor, I can only see the back of his head. The fourth one is the most intruiging one. A beach scene. A sunny day, five people lying under a parasol and a woman in the foreground in the straight sun, surrounded by shoes and clothes. I am not 100% sure but it looks like the photo was taken from where I sit now. Before the big W hotel was built. Did somebody leave this here on purpose? Was it lost?

I walk down the beach. A small stack of stones is waiting to be taken by the waves. A single rose is stuck in the sand close to the water, its petals gone. They probably have no connection whatsoever, the notebook and the piled up stones and the flower but if I wanted to, I could make a sad story out of it.

I won’t. Because I don’t know the facts and anyway, it would be a far too romantic story to be interesting. The really sad story is elsewhere. And so are the facts of that story. There is no romance to it, only useless suffering. I always wonder if people walking along the boulevard take notice of it. It is a metal sculpture with a text and a digital number on it. The number changes. Every time when I pass it I hope it is the same. But often it isn’t. Today it says “2018 : 497”. It is the number of people who have drowned in the Mediterranean this year. There is a text in four languages. “This is not just a number. These are people. The Mediterranean, a meeting point of cultures and civilisations, has now become an enormous mass grave for thousands of people without shelter who were seeking protection. We do not know their names or their personal stories, but we do know how many they are. We would like to count them, so we can pay tribute to them and never forget them.” 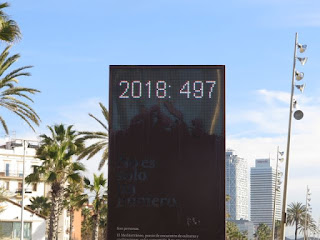 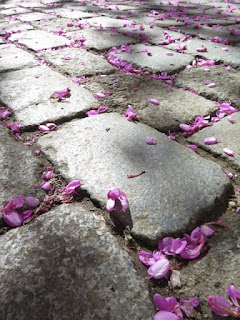