I saw animals chasing each other in the sky late at night.
A snail being followed by a dragon being followed by a bird,
a big fluffy white rabbit was hovering over them.
I wanted to take a photo but they had already changed.
The snail had turned into a person
and the dragon and the bird had become dogs, howling.
The rabbit had thrown its head in its neck,
as if it was dying.
Why take a photo of that?

I had taken a photo of the panther in the porch across the street early that day.
Only it wasn’t a panther, just a blanket covering a homeless person.
But when I watched the blanket being folded later on it wasn’t a homeless person at all.
It was a young couple, nicely dressed, saving money for who knows what.

The bumblebees on the balcony where real.
Two of them, slowly plunging themselves into the hearts of the flowers that had appeared mysteriously one day in March.
Traces of the person who lived here before I did. Who sat on the balcony to watch the world like I do now.

In the afternoon the road was blocked.
Groups of elderly people walked in one direction to join the crowd in front of governmental buildings to protest, accusing the government of squandering money while they don’t get a decent pension.
Some time later there was a big march in the other direction.
Young and old people protesting against the government trying to reduce the importance of Catalan in education.
I wasn’t sure if it was a different protest, a different manifestation but the opponent they were speaking out against was the same.
After the people were gone and the roadblocks were removed the helicopters were still there.
But they were gone by the time the animals appeared.


(Two days after I wrote this I found a map online with the meaning of the names of different countries. Spain means: land of many rabbits) 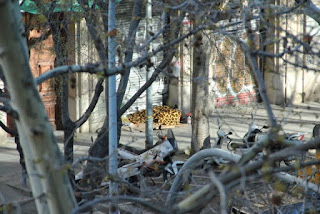