To recreate (in) nature 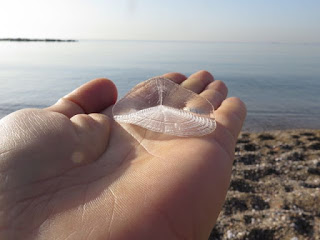 There was a lot of driftwood and small bright blue objects with white and transparent skeletons were scattered across the wet sand. There was so much of it, all similarly shaped, and their colour seemed so out of place that I thought they were trashed plastic objects at first but when I looked closer I realised they were sea creatures I had never seen before. By-the-wind sailors I read later, small brothers of the Portuguese man-o war but not so venomous. They have a small stiff sail that catches the wind and propels them over the surface of the sea. Out here on the sand the blue looked unnatural but in the water it was the perfect camouflage. There were big jellyfish as well, wonderful purple species. I skooped the ones that seemed like they might still be alive back in the water. It was beautiful to see the beach in its wild state.

I sat down on the sand and looked out over the water. A small van parked a few meters behind me and a man and a woman came out, wearing bright green and yellow working clothes. They carried big rakes and started removing all what was natural, they only left the stones untouched. It was a lot of work. They put the driftwood and jellyfish in big plastic bags.

“Medusas” I heard them say to a couple that had just arrived. The man who was in his swimming trunks pointed at the water in which I had just returned a number of jellyfish. “I saw them” he said. “Don’t swim there” the cleaners said, and the man cursed before he put his t-shirt back on.

Somewhere far away music started. The first cruise boat appeared on the horizon. More people arrived, now safe from hurting their feet on a piece of wild nature. I picked up a small fragile sail the cleaners had overlooked and let the wind take me home. 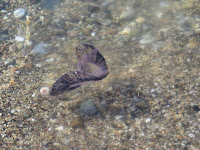 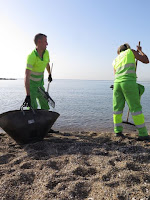 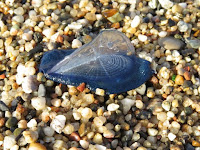